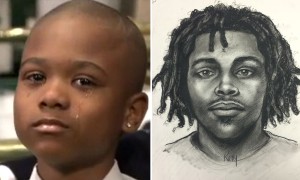 This is why you put your children in the choir! Willie Myrick was allegedly grabbed and bundled in a gray Honda Civic by a kidnapper outside his southwest Atlanta home March 31st.

The boy was miraculously released after being held captive for three hours. The family says he is still traumatized but making good progress.

The fourth grader prayed out loud and repeatedly sang his favorite gospel song “Every Praise” during the terrifying car ride; until his kidnapper became so frustrated he threw the boy out of the vehicle unharmed.

The then-9-year-old recalls the man kept cursing and telling him to shut up before eventually kicking him out miles from his home. 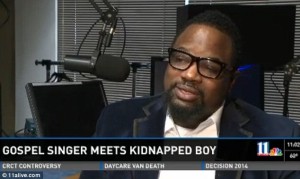 The composer of “Every Praise,” Gospel star Hezekiah Walker, traveled from New York to congratulate Willie in person. “It’s just emotional to me because you never know who you’re going to touch,” Walker told local news 11Alive.

He said after hearing the moving story and how his song had potentially saved a life, he wanted to meet Willie. “I just wanted to hug him and tell him I love him,” Walker said.

Tears streamed down Willie’s face as Walker hugged him. Walker then led the church, and Willie, in singing ‘Every Praise.’ “I really believe that God spoke through me to save that young man’s life,” Walker said.

Tony Coleman, Willie’s stepfather, says since the horrific ordeal Willie has become “clingy” but is trying to cope.

“Willie is under a lot of pressure and a lot of stress,” he adds. “He kinda just clings to me all day. He told me I am tired, Dad.”

Coleman says the family is now worried about Willie’s safety. He is not allowed to go outdoors and play and has stopped taking the school bus. “The only freedom he probably gets is in school,” says Coleman.

Still, Willie’s godmother and legal guardian, Codetta Bateman, who has raised him for the past six years, says, “[Willie] he is trying deal with the situation and forget” what happened.

“He talks about it and is stressed out but is trying to move forward,” she says. “He felt like the Lord was with him when it happened. He started praising the Lord and the guy didn’t know where to take him. That was very shocking for him for someone to just pick him and grab him and throw him in a car.”

Michael Langford, president of Atlanta’s United Youth-Adult Conference, says the aborted abduction has brought back bitter memories of a dark period 1979 through 1981, when more than 25 black children and teenagers were murdered by one or more serial killers in the Atlanta area. Wayne Bertram Williams, a convicted murderer, has been blamed for committing most of the murders.

In the aftermath of Willie’s abduction, Langford helped organize a press conference to raise awareness about a spate of attempted child abductions in the metro Atlanta area. On Thursday he led a coalition of community leaders through surrounding neighborhoods to hand out leaflets offering a $10,000 reward to find Willie’s kidnapper.

In front of a crowded sanctuary, Willie recalled the moment he was freed from the car. “He opened the door and threw me out,” Willie said with tears rolling down his cheeks. “He told me not to tell anyone.”

The service also gave parents and children tips about what to do if something like this happened to them. “The message was to arouse the consciousness of missing children everywhere,” says Flemming.

“I felt that he [Willie] used his head,” he adds. “He remained calm and collected. He’s an intelligent young man and he knew how to act quickly.”
“It has reopened an old wound of missing and murdered children. It was over 12 kids that were missing [in ’79 through ’81] before people really got serious and started acting on it.”

“We applaud Willie for his courage, strength and faith during this terrifying ordeal, “ says Natalie Wilson, co-founder of the Black and Missing Foundation. “We want parents to use Willie’s story as a teachable moment to discuss strangers and suspicious behavior, and how to protect themselves.”

The attempted kidnapper is still at large and Atlanta police say they were actively investigating the case.

The captor is a black male (Pictured Above), in his mid-to-late twenties, with long-to-medium-length dreadlocks, a light complexion, and a tattoo on the bicep area of his arm. Willie recalls the man wearing khaki shorts and a white t-shirt with a Nike logo.