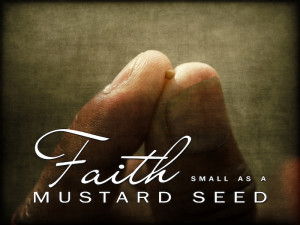 So, as I put this in perspective with my life situations, I realize that the reason some things have not worked the way I “told” them to was because I did not really have faith in God’s ability to make things line up with His word.  We can speak all we want to, but if there is no true faith behind our words, God is not obligated to make what we speak come into fruition.  Our whole walk with Christ is based on our faith in Him, His ability, and His power.  When our faith is failing or flailing, God does not have to move on our behalf.

But when we truly put our faith and trust in Him, then He shows us great and mighty things.  I have memories of testimonies from others on how God has literally healed them from cancer, my grandmother is a recipient of this type of healing.  I’ve heard about teeth being filled with gold during a church service.  I have heard of people being raised from the dead after the doctors had given up.  I’ve heard how individuals, relying on canes, crutches, and wheelchairs for mobility, have had their strength renewed and they were able to leave this instruments in the church because they were able to walk away unassisted.  I have seen a woman, at the church I attend, walk up to the altar and deposit her cane there, and walk back, unassisted, unhindered, without a limp, and standing straight up, back to her seat.  That is until she began to give God the glory in a dance!  So, what is hindering these types of miracles from happening today?  We are!

I know you are thinking that I am wrong, but let me clarify.  We are not believing in the power of God, but in the power of man.  There are so many self-proclaimed evangelists, prophets, preachers, ministers, and the like promoting their own agenda and telling you to send money for a vial of oil and making promises.  They are promising houses, land, health, and prosperity if you would just trust in them and their ability to reach God.  However, God never instructed us to put our trust in mankind.  We are to put our faith and trust in Him alone.

I am not saying those who claim to be called of God are not actually called.  I am saying that when we begin to put our trust in the creation and not the CREATOR, we are trusting in error, and God is not obligated to honor that misplacement of faith.  The human is just a vessel God is using, the actual act is a direct result of who God is and His power.  Isaiah 43:10 states, “Ye are my witnesses, saith the Lord, and my servant whom I have chosen: that ye may know and believe me, and understand that I am he: before me there was no God formed, neither shall there be after me.”  For me, this is God letting us know that He is the only God.  So, putting a human in His position is not a good choice.

We are told by Jesus that the works He performed were performed by the Father (John 14:10-11).  Immediately following these verses, Jesus indicates that if we believe in Him, we will be able to do greater works than He did!  We know Jesus raised people from the dead, healed the woman with the issue of blood, turned water into wine, gave sight to the blind, and cast out demons (deliverance).  What are we doing today?  Are these works greater than those of Christ?  If not, why not?  It is because of our own lack of faith in God’s ability.

We often quote scripture to support what we are saying, however, I do not believe we honestly believe what we are saying.  If we did, there would be evidence of our faith.  We are told that “…If thou canst believe, all things are possible to him that believeth” (Mark 9:23, King James Version).  So, again I state that the reason we are not experiencing miracles in our own personal lives today is because we do not believe.  God’s word remains true, He remains faithful.  We are our own roadblock.

Understand that in all that you do for Christ’s sake or in His name, if you have not faith, it is null and void.  Hebrews 11:6 tells us all that “without faith it is impossible to please him.”  In this same scripture, we are told that we must also believe that God is, “and that he is a rewarder of them that diligently seek him.”  Rewards can come in many different ways, but one way is the fact that we receive whatsoever we say, if when we are asking, we have the faith to believe that God will bring it to pass (Mark 11:24).

If you are struggling in your belief right now, be encouraged.  Just as in Matthew 9:23-24, believe when you can, and ask God to help you in the areas that you are not believing.

23 Jesus said unto him, If thou canst believe, all things are possible to him that believeth.

24 And straightway the father of the child cried out, and said with tears, Lord, I believe; help thou mine unbelief.

The main point here is to make sure your faith, trust, and belief is not in a human being, but in God.  Remember that the physical person standing before you is only a vessel, a conduit that God is using to place before you the promises He has spoken over you.  Your miracle is waiting on you!  It’s not because of any good works on your part, but simply because you have trusted in God who is omnipotent to provide for you.  It’s simple: Because you have chosen to trust in this Almighty God, He has to “flex His muscles” by giving you what you are believing for!  He has to.  Romans 10:11 states, “ For the scripture saith, Whosoever believeth in him shall not be ashamed.”

So, go forth, and BELIEVE!

Wow! This is great… Thank you for the reminder and for an on time word. This has truly blessed me.