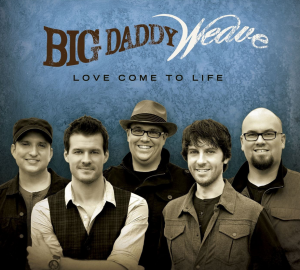 Dove Award-winning band Big Daddy Weave, currently enjoying the tremendous fan reception of their life-changing, mega-hit “Redeemed,” is releasing Love Come to Life: The Redeemed Edition today on Fervent Records. The 17-track album, produced by group member Jeremy Redmon, features their career best-selling album Love Come To Life with the addition of five bonus tracks including both acoustic and live versions of the K-LOVE Award-winning and Billboard Music Award-nominated “Redeemed” and their smash hit “The Only Name (Yours Will Be).”

Dove Award-winning band Big Daddy Weave, one of Christian Music’s mainstays, is currently enjoying its career best-selling album, Love Come To Life, an album boasting three consecutive number one radio singles: “Love Come To Life,” “Redeemed,” and “The Only Name (Yours Will Be).” In 2013, Big Daddy Weave’s monster hit song and career best-selling track, “Redeemed,” spent 11 weeks at No. 1, and took home the prestigious trophy for “Song of the Year” at the first-ever K-LOVE Fan Awards, while receiving nominations for “Christian Song of the Year” at the 2013 Billboard Music Awards, and “Song of the Year” at the 2013 Dove Awards. The first Christian AC-Monitored radio chart of 2013 featured “Redeemed” in the number one position, while the first AC-Monitored chart of 2014 rang in with “The Only Name (Yours Will Be)” in the top spot. In March 2014, Big Daddy Weave was recognized for the second consecutive year with a nomination for K-LOVE Fan Awards’ “Song of the Year” for their No. 1 single “The Only Name (Yours Will Be).” The band, comprised of Mike Weaver, Jay Weaver, Jeremy Redmon, Joe Shirk and Brian Beihl, formed when the original members were attending the University of Mobile. In 2002, Big Daddy Weave stepped into the spotlight with the release of its second album, One and Only, which debuted in SoundScan’s Christian Top 5 and earned them a Dove Award nomination for “New Artist of the Year.” In 2010, Big Daddy Weave took home the Dove Award for “Christmas Album of the Year” for its seventh album, Christ Is Come. The band has also been honored at ASCAP’s Christian Music Awards and BMI’s Christian Music Awards and is one of the 10 most played artists at Christian radio over the past decade.