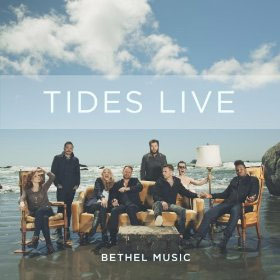 The new live album follows Bethel Music’s first-ever studio album, TIDES, which released Sept. 3, 2013 and went on to become the biggest retail debut ever for the worship ministry, hitting No. 1 on the overall Top Christian/Gospel Albums and Praise & Worship Billboard retail charts amidst unprecedented international acclaim. As Bethel Music led the songs from TIDES during its weekend services and regional gatherings, the music came to life on a new level and Bethel decided to push “record.” The resulting recordings birthed TIDES LIVE.

“The new live album offers a fresh and powerful perspective on these songs, and draws listeners into a worship experience full of spontaneous moments and sounds of praise,” says Joel Taylor, Director of Bethel Music. “Listeners are invited to step into the moments and momentum of TIDES LIVE, and participate in an authentic worship experience from one community to another.”

Taking the new music and worship favorites, like the 2013 Dove Award nominated “One Thing Remains,” to the masses, Bethel Music has seen capacity crowds across the West Coast in tour cities like Los Angeles, Las Vegas, Seattle and Portland, and are now gearing up for a tour east of the Mississippi in April. Brian and Jenn Johnson will be joined by Martin Smith (Delirious?) and Amanda Cook for a major market “Worship Nights with Bethel Music and Martin Smith” tour into New York, NY (4/7), Washington, DC (4/8), Cleveland, OH (4/9), Nashville, TN (4/10), New Orleans, LA (4/12) and Atlanta, GA (4/13). For all the latest tour detail, go to http://www.bethelmusic.com/worshipnights.

“Our heart for Worship Nights is to partner with what God is doing in communities around the world and see heaven invade earth,” says Taylor. “Join us for an authentic night of worship, encouragement and prayer as we love God together and pursue His presence.”

About Bethel Music:
Bethel Music, is a worship ministry that formed as an organic extension of Bethel Church in Redding CA. Over the last four years, Bethel Music has grown from being a local church music ministry to becoming a global outreach featuring a cadre of songwriters and worship leaders, a half-dozen CDs, chart-topping songs, and both online and on-campus worship schools. The heart of Bethel Music is to be a steward of the worship being created and released at Bethel Church, making it a resource available to the world. In addition to the thousands of people that attend Bethel Church’s weekly worship services, another 100,000-plus people subscribe to the online stream of the services at www.ibethel.org. More about Bethel Music can be found atwww.bethelmusic.com, www.facebook.com/Ibethelmusic and www.twitter.com/bethelmusic.