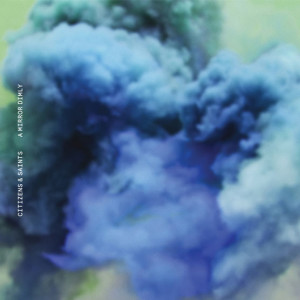 Citizens & Saints announces the release of their third studio project, A Mirror Dimly, on September 16th (Gospel Song Records). This project follows the groups successful and widely received Join the Triumph (2014) and CITIZENS (2013).

The album is a result of a difficult time for the group as they dealt with the downfall of the church organization they were associated with over the years – this project features the dichotomy of faith and doubt. Citizens & Saints wants to push the conversation and openly address the search for clarity. “We all search for something to believe in, and A Mirror Dimly is a concept album about our search for clarity,” shares front man Zach Bolen. “Faith and doubt aren’t exclusive to Christian belief, but relative to the nature of the human heart. To doubt God is evidence of that nature, and doubt in one thing often prompts the belief in another. So in regards to the gospel, we have to first doubt our own ability to save ourselves (acknowledging our neediness) in order to believe (have faith) that God is our only way to salvation. To believe in God is evidence of a power at work that goes beyond the bounds of human nature.”

Citizens & Saints was birthed out of the Mars Hill Church where they led worship at one of the campuses. It was there that they witnessed a movement that would greatly impact them as individuals and as a group on their spiritual journey. Bolen shares how this specific project wouldn’t exist without the fall of the Mars Hills church.

“This record wouldn’t exist if it weren’t for the fall of Mars Hill as an organization. One of the best days in the history of Seattle was the day Mars Hill shut it doors. While the brothers and sisters of that community may not meet all together in similar places anymore, the Church of Christ did not crumble and it certainly has not weakened because of it. We experienced the love of God through His presence and His people in ways we never had before. A Mirror Dimly is the result of both personal struggles, and conversations with those swimming in doubt post Mars Hill, yet inclusive enough to be a cathartic journey of listening and contemplation for any and all. We’re not the first people to go through hard stuff; we all suffer in different ways. There is hope beyond the foggy glass; the joys of being loved forever, free from the burdens of the wounds we all carry.”

Staying connected personally with their listeners, Citizens & Saints sent 500 fans a “flexi vinyl” of the new song “Relent” from the upcoming album. Fans then posted photos or videos of them listening to the new single on social media starting the excitement for A Mirror Dimly. The anticipation continued this week as they revealed “Madness,” the next single available via 1300 fans’ social media posts.

Since their last release, the group has increased their time on the road as they have played with Phil Wickham, John Mark McMillan, Beautiful Eulogy, Jon Foreman, Propaganda and more. This fall Citizens & Saints will be heading out with Kings Kaleidoscope – dates TBA soon.

ABOUT CITIZENS & SAINTS: Citizens & Saints are an alternative rock band with gospel roots based in Seattle, WA. Founded in 2011, by Zach Bolen, Adam Skatula and Nathan Furtado. The group released their label debut CITIZENS in 2013 charting on Billboard’s Top Heatseekers chart (No. 6) and resulted in a radio single that Topped Air 1 network for 15 weeks. In 2014 they released their sophomore album Join The Triumph.