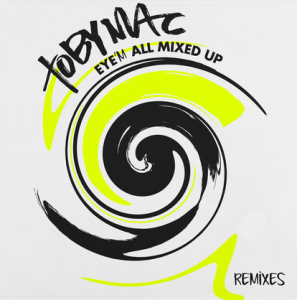 Five-time GRAMMY® winner TobyMac debuted his latest remix project this week – EYE’M ALL MIXED UP (REMIXES). The project is his first release since his history-making studio album EYE ON IT, which debuted at No. 1 on the Billboard 200, only the third Christian album to accomplish this feat at the time of its release. EYE’M ALL MIXED UP (REMIXES) features reworked tracks off EYE ON IT by remixers Capital Kings, Telemitry, Soul Glow Activatur of Family Force 5 and more.

EYE ON IT debuted to unprecedented critical acclaim, nabbing the GRAMMY® Award for Best Contemporary Christian Music Album, and media outlets are embracing the remix project with the same enthusiasm:

“TobyMac fans will love the new energy breathed into these songs by an elite group of producers. This album should be an essential for every dance party across the nation.” -NewReleaseTuesday.com

“All of the songs here are excellently crafted and some of them are even improvements of the originals.” -Jesus Freak Hideout

“Christian music pioneer TobyMac has reinvented himself yet again.” -Breathecast.com
“With an impressive cast of guest producers and some great source material in TobyMac’s award winning album, there’s very little to not like about this release.” -Soul Audio

“It’s as if you haven’t heard the songs before. Breathing new life into a song that was created two years ago can be hard to do.The album is a testament to TobyMac’s creativity and musicianship.” -The Front Row Report

“This is a must have for TobyMac fans!” -The Global Dispatch

This week, TobyMac will head out on the “Worship, Stories & Songs Tour” featuring Matt Maher and Ryan Stevenson. The 20-city tour is a departure from TobyMac’s traditional high-energy live performance and will instead focus on meaningful depictions of the stories behind the songs. For more information and full tour dates, visit www.tobymac.com/tour.