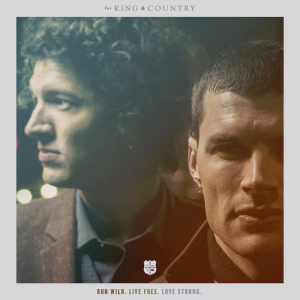 Top-selling, award-winning for KING & COUNTRY, consisting of brothers Joel and Luke, are one week away from the debut of their highly-anticipated, sophomore album RUN WILD. LIVE FREE. LOVE STRONG.. Premiering the critically acclaimed new album for the first time, the duo streams the full, 14-track recording with Amazon.com and K-LOVE beginning today and through the Sept. 16 release of the recording.

Songs from RUN WILD. LIVE FREE. LOVE STRONG. are also gaining national attention through significant televised sports placement. “To The Dreamers” was heard this past Sunday during the NFL Sunday Night Football: Indianapolis Colts vs. Denver Broncos game on NBC and as part of the “The Shows That Touch You” campaign, which premiered during the 66th Emmy Awards and continues to receive significant network placements. To see and hear the campaign video promoting the networks fall TV line-up, go to http://youtu.be/nPHXIsip5pE.

CBS also featured the new album’s encouraging anthem, “It’s Not Over Yet,” during its airing of the Men’s Semifinals of the US Open Tennis Championships.

As the reigning New Artist of the Year Dove Award recipient, for KING & COUNTRY has also been tapped to perform on the 45th Annual GMA Dove Awards Oct. 7, which will air on the Trinity Broadcasting Network (TBN) Oct. 12. The duo is further nominated for four GMA Dove Awards this year, three for the lead single and No. 1 song “Fix My Eyes” from RUN WILD. LIVE FREE. LOVE STRONG..

Prior to the awards show, for KING & COUNTRY embarks on a major market, 40-city fall “YOU MATTER – THE TOUR” that launches Sunday, Sept. 14 in Nashville (Franklin, TN). The tour then continues into cities like Washington, D.C. (Woodbridge, VA), Pittsburgh, Indianapolis, San Diego, Las Vegas, Austin, Albuquerque and more, as well plays significant venues like Southeast Christian Church in Louisville, KY (9/21), where 8,000 people are expected to attend, and Saddleback Church in Los Angeles (Lake Forest, CA, 10/20) before wrapping up at the Sun National Band Center in Trenton, NJ (11/22). Being sponsored by Compassion International, all “YOU MATTER – THE TOUR” dates, as well as tickets, are available now at www.forkingandcountry.com.

With RUN WILD. LIVE FREE. LOVE STRONG., for KING & COUNTRY has created an album that lives up to the band’s name, a reflection of standing and fighting for something bigger than yourself, a mission statement that drove the duo from the first words written for this project until the last note was recorded.

“RUN WILD. LIFE FREE. LOVE STRONG. is a statement of reclaiming our birthright as humans to live a life that is for others–a life that is others-focused, God-focused-and in that find what it truly means to run wild, live free and love strong,” says Joel.

Available for pre-order now, iTunes is offering three Instant Grat Track downloads, including “Fix My Eyes,” “It’s Not Over Yet” and the newest single, “Without You (Feat. Courtney),” which hit No. 1 on the Christian & Gospel Top Songs iTunes® chart and is an inspiring, real life message of hope that features a beautiful duet with Luke’s wife Courtney. The song will also become the first video from RUN WILD. LIVE FREE. LOVE STRONG., which is slated to debut later this week.