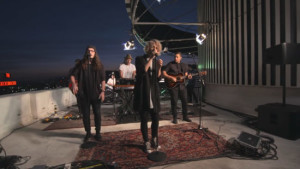 The video features the group performing the hit song from the rooftop of the historical Capitol Records tower in Los Angeles.

UNITED released EMPIRES last month resulting in a No. 5 Billboard 200 and No. 1 Billboard Christian albums chart debut. Along with the sales success, UNITED received coverage in USA Today, Billboard, Rhapsody, Christianity Today and more along with performances on the TODAY show and NBC’s Beyond A.D.

See the lyric video below.