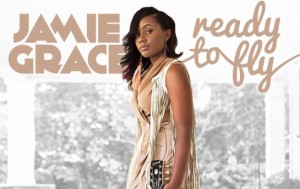 Available January 28, the new studio record follows her breakout album One Song At A Time, which propelled Jamie to her first major award, the Dove Award for New Artist of the Year, and featured the GRAMMY® and Dove Award nominated hit “Hold Me (feat. TobyMac).” The album reunites Jamie with producers Christopher Stevens (TobyMac), David Garcia (Britt Nicole) and for the first time with Chuck Butler (Royal Tailor).

“The entire concept of Ready To Fly is being ready even when you don’t know what the Lord has planned for your future,” says Jamie. “I wrote the title track the night before I turned 18. I was crying out, wondering what God’s plan for me was. I started to doubt so many things but as I randomly began singing the lyrics to Ready To Fly, I realized I don’t have to have my whole life figured out to start my journey. This record is about being in the waiting with God, yet while you’re waiting being ready to move – Ready To Fly – when the timing is right.”

Starting this week, Ready To Fly is available for preorder at iTunes. Her upbeat and inspirational tracks “Beautiful Day” and “Fighter” are included for an instant download when the album is purchased via preorder. The album features appearances from Manwell of Group 1 Crew, her sister Morgan Harper Nichols and Jason Crabb on the digital only bonus track version of “Fighter.”

The anticipation for new music from Jamie is evident in the success of her debut single “Beautiful Day.” Since its release this summer, the song has enjoyed a steady rise to the Top 5 on the Christian Hot AC/CHR and Christian AC Indicator radio charts. Currently reaching an audience of nearly 5 million, the single also holds a strong footing in the Top 20 on the Billboard Christian Songs Chart and the Top 5 of the iTunes® Christian & Gospel songs chart.

Accompanying the single, Jamie has also released a lyric video for “Beautiful Day” that combines her performance of the song with animated hand drawn lyrics and imagery below. Jamie also put a personal touch on the lyric video for “Fighter,” hand writing the lyrics onto her piano.

Astounding critics as one of the biggest breakout stars in the industry, Jamie Grace was discovered by TobyMac and was subsequently signed to his label, Gotee Records. Since then, she’s experienced a major wave of popularity, evident in her GRAMMY® nomination, her YouTube’s channel combined 16 million views and her appearance on ABC’s hit talk show ‘The View.”

Kicking off this week, Jamie will be a featured guest on TobyMac’s “HITS Deep Tour 2013,” making stops across the country through December. The “HITS Deep Tour 2013” will also include Brandon Heath, Mandisa, Colton Dixon, Chris August and Capital Kings. Early next year, Jamie will continue an impressive touring schedule, joining The Roadshow 2014 alongside the likes of Skillet, Third Day, Royal Tailor and more. To view her complete tour schedule, visit www.jamiegrace.com.