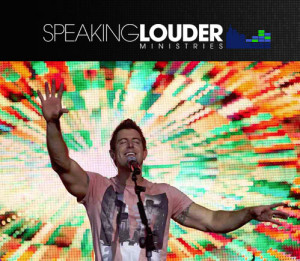 This month, Jeremy Camp launched Speaking Louder Ministries, named after his most recent album and song Speaking Louder Than Before. Today, Jeremy made a special announcement about the new ministry…

“I will stand my watch and set myself on the rampart, and watch to see what He will say to me, and what I will answer when I am corrected. Then the Lord answered me and said: “Write the vision and make it plain on tablets, that he may run who reads it. For the vision is for an appointed time; but at the end it will speak, and it will not lie. Though it lingers, wait for it; because it will surely come, it will not delay.” (Habakkuk 2:1-3).

Jeremy Camp: Although this was written thousands of years ago, it perfectly presents the message God has been speaking to my heart over the last 15 years. I am more grateful than words could ever express for what God has done in my life over these years as I have waited for the appointed time of this vision.

I have had the honor and privilege to be able to share the good news of Jesus Christ and His love, but there is urgency in my heart now like never before. As a believer, I realize that we have been given a gift – the hope of eternal life with the very One who conquered our sin on the cross and took upon Himself the terrible death that we deserved.

In fact, I believe the vision has had to wait for 15 years because I did not understand that the urgency I felt to reach the world for Jesus and the platform I was being given was for that very reason. I’m like you – I can’t believe God would use me for anything, let alone something that would reach around the globe. The reality is that God doesn’t need us at all, but He still desires to use us and we get to participate with Him strictly because of His grace and the fact that He loves us so much. He has given us such a precious gift in His Son, so why do we hold back? Why don’t we shout it out from the rooftops? If we are being the image of Christ and showing love, then we’re doing what we have been called to do. Always in love, that is the key.

The desire I’ve had all these years to do just that has been burning in my soul for a very long time. It was what gave birth to the song, “Speaking Louder Than Before, “ the words of which are written below. That song was written in 2008 and now in 2013, the remainder of Habakkuk’s words are finally being realized. This is where I find myself at this point – convicted yet excited about what the Lord has done in my life personally. I don’t want to stand on stage night after night, without being on my face beforehand truly crying out for those that have come to the event. I am realizing that there are opportunities everyday to encourage, evangelize, or exhort someone. I am not taking this lightly. We have opportunities to be used by the living God on a daily basis and I don’t need the platform of a concert hall to do so.

My wife Adrienne and I are so excited to be launching this website that reflects what God has been doing in our hearts for over a decade and a half in human terms, yet from the foundation of the world in God’s sight. We are convicted to the core that the time is now by the words of Jeremiah:

Then I said, “I will not make mention of Him, nor speak anymore in His name. But His word was in my heart like a burning fire shut up in my bones; I was weary of holding it back, and I could not (Jeremiah 20:9 NKJV).

With “fire in our bones,” we are writing it all down in order that others may read it and run with us in it, who feel this same urgency to be a part of the revolution in the greater plan of God for man. We invite you to join your voices and hearts with ours in “speaking louder” until the whole world hears.

“Speaking Louder Than Before” Lyrics:

Many hurting hearts are crying
But our voices seem to be dying
Can you see the battle raging on?

We are, we are in desperation
We need to reach this generation
We are speaking louder than before

Take every chance that you can
Move together taking a stand
Never losing heart, we’ll speak as one

We are, we are in desperation
We need to reach this generation
We are speaking louder than before