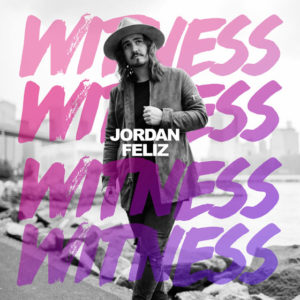 Just days after its release, Centricity Music’s Jordan Feliz is receiving vast recognition for “Witness,” the first single off his highly anticipated sophomore album, which is set for a March 2018 debut.

Feliz wrote the new track with his frequent co-writers Colby Wedgeworth and Paul Duncan, who both also collaborated with Feliz on his hit single “The River.” “Witness” gained double-digit radio adds in its premiere weekend (Air 1, Sirius XM, Joy FM, Family Life Radio, among others) and currently holds over 112,000 Spotify streams. It was not only selected for several noteworthy Spotify playlists, including New Music Friday, Top Christian, and Positive Pop, but also for Apple Music’s “Best of the Week” feature.

“Choosing “Witness” as the first single just came down to what we really want to say first-thing for this new record,” Feliz says. “I want every record to represent a season in my life, because we’re all going through things and my prayer is we can resonate together. “Witness” is about how God is creating miracles in our lives every single day, but oftentimes we don’t see a lot of it. This song is a way to acknowledge that and put Him on the pedestal and throne where He belongs.”

“Witness” gives fans an early look into Feliz’s upcoming album, currently in the final stages of production. This follows the strong success of his first record, 2016’s The River, which debuted at No. 4 on Billboard’s Christian Albums chart and was nominated for a GMA Dove Award for Pop/Contemporary Album of the Year (2017). Containing multiple Top-10 singles, it also led to Feliz winning the 2016 Dove Award for New Artist of the Year.

Right now Feliz is on the ALL IN Tour with Matthew West. Last night Feliz announced that he will join the Winterjam tour in January, leading to his album’s release in March.