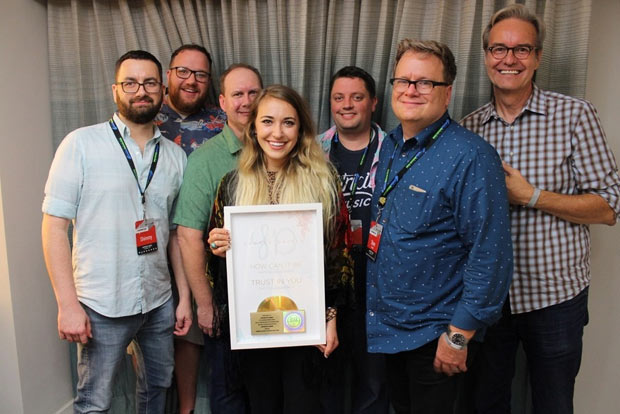 Just three years since she burst onto the Christian music scene, Lauren Daigle has received numerous accolades acknowledging the powerful reach of her music, ranging from Grammy nominations, Billboard Music Awards, to certified Gold status for her debut album, How Can It Be. Now the Centricity Music singer-songwriter has been honored for two Gold singles off of that 2015 debut.

Marking the achievement of 500,000 units sold, Daigle’s single “How Can It Be” was given RIAA certification in November 2016; her single “Trust In You” garnered the same recognition in May 2017. This milestone achievement of two Gold singles coming from a debut album is unprecedented for a female CCM artist. Daigle’s label team surprised her with a commemorative presentation and plaque at the Christian Music Broadcasters’ Momentum conference in Orlando. Daigle expressed how this honor resonates with her not just professionally, but personally:

“’Trust In You’ and ‘How Can It Be’ are two songs I often return to when I feel in the thick of difficulty. They remind me of a grace that outruns any mistake, any amount of shame that arises in this race. They remind me to life my eyes to the one most Sovereign,” Daigle expressed. “I’m so honored that so many people have been impacted by these truths just as I have. There is nothing like singing these songs live with an audience that’s singing louder than myself. I’m grateful to see the unending response and thankful for all of the support. It continues to stun me!”

Amidst such acclaim, though, Centricity General Manager Steve Ford notes that the real impact of Daigle’s songs is found in the genuine connection they have with listeners.

“Of course we are so excited and proud to see how Lauren’s hard work and craft have found success in sales and at radio, but her music’s true achievement isn’t something that can be measured by numbers or charts,” Ford describes. “That achievement comes from the stories of her songs helping people endure life’s hardships or inspiring all of us in our faith-walks. Our pride in Lauren is for the dedication she brings to using her gifts to serve the Lord and serve others. It’s a privilege to be by her side as she grows as an artist and lives out her calling.

Daigle just finished a month of performances with the Outcry Tour. Her latest single “O’Lord” officially goes to radio next week but has already received early adds and is climbing up Billboard’s Hot Christian Tracks chart, currently standing at No. 18.