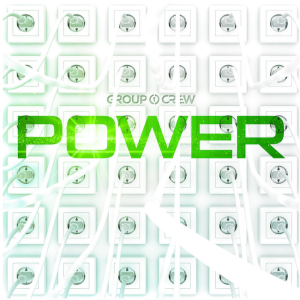 Not only has Group 1 Crew won five Dove Awards, achieved three No. 1 singles, six top 5 radio hits and have had their music featured on such networks as MTV, VH1, NBC and Fox, they have just released their fifth career studio project, POWER. Officially released this past Friday, July 29th, POWER is already achieving great press from the media and fans alike.

With coverage in outlets such as Charisma Magazine and CBA Market, along with upcoming features in YouthWalk, CCM Magazine and others, Group 1 Crew’s Manwell Reyes was the featured guest in last week’s New Release Today’s NRT Live Google Hangout promoting the album. Be sure to see below for a few POWERful reviews:

“These funky Friday-night anthems turn an evening of praise into the weekend’s greatest dance party.” – iTunes

“POWER consistently points upwards with a hand steadied by the peace of God and a heart overflowing with love and grace.” – Today’s Christian Entertainment

“Great beat, lyrics on fiya, rhythm keeps you moving!” – a fan via iTunes

“The energetic atmosphere is undeniable, and Manwell Reyes outperforms with each of his rapped verses. With its massively energetic sounds and an impressive assortment of vocals, POWER certainly delivers.” – The Christian Beat

“Not only do the surging synths, dance-floor tailored grooves and hopeful power ballads rank right up there with the most infectious in Group 1 Crew’s arsenal, but they all pack a tremendous potential for crossover impact.” – CCM Magazine

Despite running into vocal challenges that resulted in surgery last December and not being able to talk for three months, it was actually while on the road months prior that Reyes hit a crossroad – with his career, his identity and his motivation. He created these new songs from a deeper understanding of his own worth and value in the eyes of his Creator. “God really put me in my place when He made me aware of the fact that He loved me before I even started singing a note, before anyone knew who Group 1 Crew was. Music is what I do but it’s not who I am. It’s been an amazing revelation to know this and find freedom from what others may think of me.”

POWER is available at iTunes and everywhere music is sold and can also be heard in full as a visual playlist on YouTube. The album’s five music videos are placed below, and its sixth, for the song “Hold Back The Rain” is filming this weekend and will be available soon.