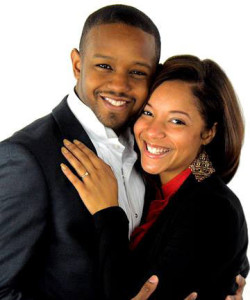 Just in time for Valentine’s Day, hip hop artist George Moss announces his engagement to Michelle Cummings. George first noticed Michelle back in 2010 at a concert he was performing at her church.

She was in the front row and he tried to make eye contact with her, but she just walked away and blew him off. After the show, George found Michelle on Facebook and added her as a friend. As a result he kept seeing things that she posted and he really like her character and personality. However, after a few months, Michelle deleted George on Facebook. Over the years as George went back to her church to visit, he kept an eye out for Michelle, but never ran into her.

Then last September out of the blue one of George’s friends from high school text him and said that she had someone that George should meet. George had a lot of people that were trying to fix him up but he wasn’t really looking for someone. He had plans to move to Nashville, so he didn’t think this was the right time. However, since his friend went to the same church that he first seen Michelle, he thought he would ask who it is, just in case… and you guessed it… it was Michelle!! After getting her number from his friend, George took Michelle out to lunch. He said that one thing that really impressed him from the start was that Michelle didn’t put on a bunch of make up and get all dressed up for the date, she just seemed very genuine. Over the next couple of months as they got to know each other better, George says he put Michelle through “an intense interview process”. He wanted to make sure that Michelle was someone that he could potentially spend the rest of his life with.

On New Year’s Eve Michelle and her daughter came over to George’s house for a mini New Year’s party. George, Michelle and the kids set up a tent/fort in the living room. They ate pizza rolls and had air-soft gun wars. Just before midnight they started talking about what they were thankful for in 2013, and what they were excited about for the new year. After the kids and Michelle shared what they were thankful for, George, inspired by the verses in John 13, began to wash all of their feet, starting with the kids. When he got to Michelle, while kneeling down to wash her feet, he proposed… and she said YES!!

Take a look at Moss talking about his new family in the video below.