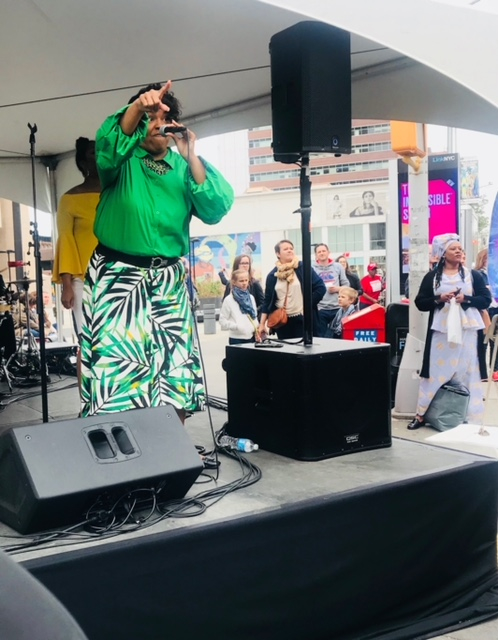 Angela Missy Billups, better known as the “Sweetheart of Gospel Music,” was one of the performers selected to be stationed along the 2018 TD Five Boro Bike Tour route in New York City on Sunday, May 6, 2018.

From her stage located at 125th and Adams Clayton Boulevard Angela Missy Billups provided live music and inspiration for the over 32,000 cyclists.

Her uplifting message of encouragement continued at the pre-Mother’s Day Women of Worship Experience at Greater Refuge Temple. The New York native currently has a new single, “Chainbreaker” available for purchase on all digital music outlets.

Missy’s purpose behind “Chainbreaker” is not only to share her story but to be an encouragement to others.

“I sit here with tears in my eyes,” she said, “seeing so many of our youth and adults bound and depressed by domestic violence, unemployment, incarceration, drug habits they can’t beat, and women and men looking for love in all the wrong places.  It reminds me of the children of Israel going through the cycles but never having the chains broken. “I pray that this song will touch the world,” Missy concluded, “that somebody will hear it, latch on to God, and believe He can do it!”

Preview and purchase the album by clicking here.

Hailing from New York, New York, Missy is a three-time award winner and finalist of the New York Tri-State McDonalds’ Gospel Fest. In 2015, she received the Black Women Rock Award and Gospel Song of The Year at the Women’s Gospel Music Awards. She was nominated for four Rhythm of Gospel Awards. In addition to several appearances on BET’s Bobby Jones Gospel television program, Missy has sung on Atlanta Live, TBN and The Songwriters Circle Television Show. Her singing has taken her to points throughout Europe and to the island of Jamaica.