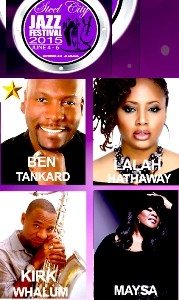 6’6″ Former pro basketball player BEN TANKARD has long been regarded as a “gentle giant” with a sweet smile. The multi-talented Grammy nominated keyboardist brought that smile, his love, his humor, his talent and his full band to the stage of Steel City Jazz Festival in Birmingham, AL this past week-end and literally turned it out. The annual 2 day-event featured some of the world’s best known jazzers including: Kirk Whalum, Najee, Lelah Hathaway, Maysa, Norman Connors, War, Peter White, Euge Groove and Norman Brown.

JazzFest producer CEDRIC ALLEN said, “Having BEN TANKARD as a headliner on our show this year put this festival OVER THE TOP. Not only is BEN an awesome performer and considered the ‘Godfather of GospelJazz,’ but he is also the star of the top family reality TV on Bravo/ NBC network –THICKER THAN WATER: THE TANKARDS. He drew TV fans to the event that were not jazz music fans. His presence also gave us further credibility with our sponsors, including companies like Coca-Cola. Every artist was good but BEN TANKARD was a fan favorite. We will definitely have him back next year.” 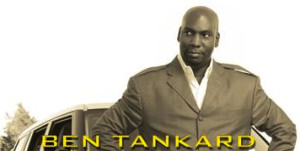 TANKARD’S dynamic set featured songs from his recent hit CDs: FULL TANK and FULL TANK 2.0 which have been riding the top of the charts all year. Tears of joy were shed in the park as he dedicated an Ole Skool jam to his basketball and smoothJazz fallen comrade, the late WAYMAN TISDALE. A Spirit of Love was in the air as Ben invited his wife Jewel to the stage to greet the festival. The TANKARDS talked about their family and reality show and the importance of unconditional love. Ben then requested that everyone in the park leave their seats and go hug 10 people that they did not know as he played his rendition of the Diana Ross hit “REACH OUT AND TOUCH SOMEBODY’S HAND.”

With no security in tow, the loving gentle giant jumped off the stage as the band played and ran out into the audience of 15,000+ and begin to hug everyone he could get his arms around. One elderly wheelchair ladened fan burst into tears when he embraced her. What a moment……maybe we CAN make this world a better place.