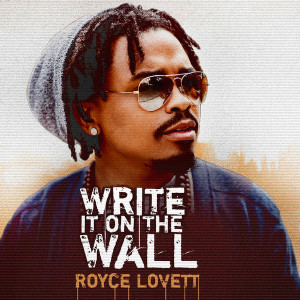 New Pop/Soul artist Royce Lovett brings a needed breath of fresh air to music. Lovett is a multi-talented singer, songwriter and rapper whose unique sound and socially conscious lyrics not only spark conversation, but emotion.

The once underground emcee and Tallahassee, FL native is gearing up for his first release on Motown Gospel, with a 20+ city tour to support his 5-track EP entitled; WRITE IT ON THE WALL, in stores and online everywhere Friday, October 23, 2015.

Lovett, teamed up with, famed producer Nate Butler (Cheetah Girls, Luther Vandross, Craig David, Christina Millian), to masterfully craft a collection of songs that will rewrite the rules of what music lovers have come to expect from “inspirational artists”. WRITE IT ON THE WALL dresses up messages of hope, love, self-reflection, and social injustice in a progressive Urban infused style.

Check out Royce tonight with the debut of his title track single “Write it on the Wall” airing New Music Tuesday, on the nationally syndicated urban inspirational radio program “The Nightly Spirit with Willie Moore Jr”. The program airs from 7pm EST – 11PM EST (4pm PST-7PM PST) in 21 markets. Fans can listen online at http://blackamericaweb.com/category/the-nightly-spirit/.

Royce is currently on a 20+ city promotional tour in support of his upcoming EP release WRITE IT ON THE WALL. See the list of upcoming appearances below.