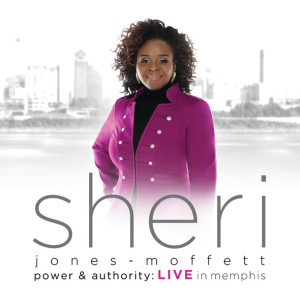 Coming in as the highly anticipated follow-up to RENEWED – her Grammy-nominated debut album, POWER & AUTHORITY lives up to its moniker by assembling a collection of commanding and powerful numbers that not only move and inspire, but also interlace to lend a narrative of worship.

“After RENEWED, I want every project that I do to tell a story about the space that I’m living in,” Sheri explains. “My mentor, Donald Lawrence, told me, ‘Let every moment stand alone. Don’t try to make the next moment look like this one.’”

Such personal narrative is all the more telling via the live format Jones-Moffett chose for her sophomore project. Produced by her label-mate Grammy award-winning producer Myron Butler, POWER & AUTHORITY gave the singer an opportunity to truly be led into extemporaneous atmospheres of worship. The results of those experiences are ten high-spirited live recordings.

The album’s electrifying opener, a revitalized version of the classic COGIC shouting tune “Keys To the Kingdom,” turns the ignition for what listeners will soon find is an unforgettable audio journey. Putting her unique twist on the tune’s arrangement, the song shines as a clear showcase of Moffett’s artistic and ministerial maturity. The same can be said for other remakes and revisits found on the project including revamps of Yolanda Adams’ “Wash Me,” Milton Brunson’s Thompson Community Choir’s hit “There Is No Failure,” and a live remake of her own “Grace of God” – a favorite from her inaugural project.

Other standout tracks include the album’s first singles “Shine” and “Faith To Believe,” both available on iTunes. While “Shine” and its heartfelt lyrics continue to live up to its titling by being a beacon for listeners in need of spiritual uplifting, “Faith To Believe” follows suit with its equally palatable recipe of powerful vocal displays and touching lyrics accented by a love of God that simply emanates from the song.

Join Jones-Moffett as she emphatically imparts worshippers the reminder of their true POWER & AUTHORITY via her new live album, in stores and online today.

As a featured member of two of the most beloved Gospel ensembles of the past two decades – Donald Lawrence’s Tri-City Singers and the duo Ted & Sheri – Sheri Jones-Moffett carved a deep niche for herself in the hearts of Gospel music lovers long before the 2009 release of her solo debut, RENEWED. The success of that project firmly established her as one of the great power vocalists of the contemporary Gospel age, while earning a GRAMMY® nomination.

With her sophomore album, POWER & AUTHORITY: LIVE IN MEMPHIS, Sheri confirms her status as a seasoned artist with trademark vocal inflections, distinct melodies, and life-changing messages. The 10-song project, produced by Grammy-award-winning producer Myron Butler, serves as tribute to a musical journey of more than 20 years, while testifying to this unique moment in Sheri’s artistry.