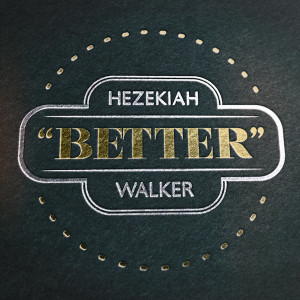 Following his global hit anthem “Every Praise” and 2013 album Azusa the Next Generation, the chart-topper sets the stage to continue creating powerful inspirational music and bringing his signature ministry style to fans everywhere on this first single, with this new album marking his sophomore Azusa project, slated for Summer 2016 to be released under the umbrella Azusa Inc./eOne Music.

Hezekiah Walker teamed up again with Gospel hit-maker Donald Lawrence on the production of “Better,” and hit the stage at the 31st Annual Stellar Gospel Music Awards to debut the song. Walker thrilled the crowd in Las Vegas in some of the show’s most celebrated moments, with two unforgettable live performances – performing “Better” for the first time on television, and performing in a heralded reunion with his longtime brotherhood/fellow Gospel superstars Donald Lawrence and Ricky Dillard for a poignant medley tribute honoring the late Gospel great O’Landa Draper.

Fans can catch Hezekiah Walker’s performances on the 31st Annual Stellar Gospel Music Awards, premiering on TV One on Sunday March 6, 2016 at 6 pm EST/5 pm CST, with encore broadcast airings of the show at 8 pm and 10 pm EST, as well as additional airings in national syndication on 150 stations from March 12th – April 10th.

Hezekiah Walker says: “I’m honored and humbled to continue to deliver music that makes a lasting impression on people all over the world. ‘BETTER’ is a Smash Hit that I’m proud of.”

Phil Thornton, eOne Music’s Vice President and General Manager of Urban Inspirational, says: “eOne Music is excited to join forces with Hezekiah Walker, whose prodigious gifts have continued to make an unparalleled impact on Gospel for 30 years. Uplifting and spiritually guiding countless people across the globe with his hits, we can’t wait for fans to hear ‘Better’ – a unifying decree that’s a powerful introduction for the new music to come on his fifteenth album!”