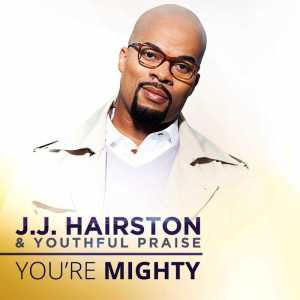 For over a dozen years, JJ Hairston & Youthful Praise has been one of the most popular choirs in the USA. Their hit songs “Incredible God, Incredible Praise,” ”After This,” “Lord of All” and “Resting on His Promise” have served as the soundtrack to the lives of scores of Millennial-age churchgoers.

JJ & YP can now add another hit to their impressive resume with their new single “You’re Mighty” cracking the Top 10 on Billboard Magazine’s Gospel Airplay chart landing at #9 with +63 spins and #15 on its Hot Gospel Songs Hybrid chart (week ending February 12). “You’re Mighty” is being played on 41 of 46 Nielsen BDS stations that make up the chart panel. Additionally, the single is #11 on the Mediabase Gospel Airplay Chart.

“You’re Mighty” marks the fourth consecutive radio single from JJ & YP’s best-selling #1 album I SEE VICTORY (Light Records/Entertainment One) to reach Top 25 on the Billboard Gospel Airplay chart with singles “It Pushed Me” (#13 peak), “Bless Me” featuring Donnie McClurkin (#3 peak) and “You Are Worthy” (#25 peak).

“Congrats are in order for truly one of God’s anointed… J.J.’s star continues to rise and we are being blessed as a result,” says Lee Michaels, Program Director for Baltimore’s Heaven 600.

Additionally, JJ and his wife Trina who is a certified marriage coach have been promoting their latest venture entitled the #AmazingLove campaign. Most recently, they’ve made appearances on News One Now with Roland Martin (TV One) and nationally syndicated radio shows The Rickey Smiley Morning Show, The Willie Moore, Jr Show and The Nightly Spirit with Darlene McCoy speaking to broken marriages. Tune in this Sunday, February 14 at 7:15 PM – 8:15 PM ET as JJ and Trina host a Valentine’s Day call for broken marriages. Dial in number is (605) 475-6333 and Access Code: 3776408.