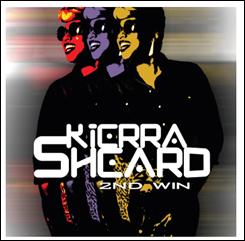 Gospel singer Kierra Sheard announced what her second single will be off her forth-coming album.  She made the announcement on The James Fortune Show.

The new single is called “2nd Win,” and it’s produced by her brother J. Drew.

Kierra Sheard used a old sample of The Clark Sisters in the background of the song, and wrote the song.

Her new CD is out on July 22nd.  The first single off her forthcoming album was “Trumpets Blow.”