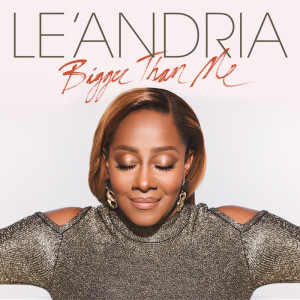 GRAMMY® and Stellar Award-winning artist Le’Andria introduces a dose of joyful sunshine with the release of the uplifting new single “Bigger Than Me”, available at digital providers now and at radio beginning April 17th.

Marking the lead single from her upcoming new album, Le’Andria also unveils several new visuals with the lyric video for “Bigger Than Me” (below).

Penned and produced by renowned hitmakers Claude Kelly and Chuck Harmony (whose range of work includes Fantasia, Rihanna, Bruno Mars, Tori Kelly and more) – the bubbly, funky track and Le’Andria’s soaring vocals invite listeners to take to heart the empowering message of self-acceptance and praise for God’s unique plans – with lyrics such as “Don’t let anybody hold you back! / You were made for something special / Now that’s a fact”.

Fueling self-confidence with the encouragement of not being afraid to be yourself, “Bigger Than Me” showcases a refreshing outlook to push through uncertain times, pairing Le’Andria’s celebrated voice with a creative new sound.

Le’Andria says, “Recording ‘Bigger Than Me’ was an epic experience! I am so excited to share this new song with you all! Embrace and celebrate you and your special gifts! I pray this song blesses you and recharges your spirit, and I can’t wait to hear what you think of it!”

Building anticipation among fans for what’s in store, Le’Andria continues to record for her new album and perform across the country, with recent performances in the Las Vegas and Memphis areas, and an upcoming performance on Sunday, April 23rd, 2017 at the Carl Perkins Civic Center in Jackson, TN.

Le’Andria: “Bigger Than Me” is available now via digital providers including Apple Music, Amazon, and Google Play.