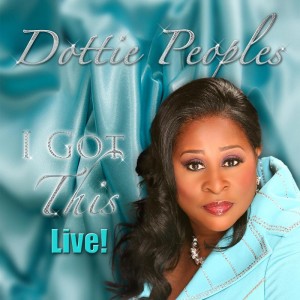 Grammy® Award-nominated, Dove, Stellar, GMWA, NAACP Image Award-Winning Singer DOTTIE PEOPLES releases I GOT THIS – LIVE!, February 5 and launches a simultaneous multi-city promotional tour with performances at churches, stops at radio, and television appearances in support of the new CD.

“I’m excited to get out on the road and share my new music with everyone,” said Dottie. “We have many performances and events planned over the next few months, and I’m looking forward to ministering in cities up and down the east coast.”

I Got This – Live! is released by Dottie’s independent label DP Muzik Group with sales and distribution through Thirty Tigers/Sony/RED and Provident. The collection of 13 tracks features Dottie at her finest – praise and worship, contemporary and traditional gospel music delivered through her signature powerhouse vocals. Recorded at Siloam Church International in College Park, Ga., I Got This – Live! includes songs such as the title cut and radio single “I Got This,” the classic “Everything Must Change,” and praise and worship songs “Welcome” and “Manifest Your Glory.”

“I Got This” debuted on the Gospel Radio Monitored Chart at #29 and is gaining momentum landing at #26 this week. Fans can purchase the single online from iTunes and all digital retailers. Dottie is on the road making stops at churches, special events, radio and media outlets across the country in support of the single and CD release.

For more upcoming tour dates, the latest news, photos, stream of songs from the upcoming CD and more, check out her website, www.dottiepeoples.com, ‘like’ Peoples on Facebook at facebook.com/officialdottiepeoples and follow her on twitter.com/dpmuzikgroup.

Dottie Peoples is a three-time Grammy®-Award nominee and the winner of numerous Stellar, Dove, Soul Train, NAACP, and GMWA awards. Known for her classic hits, “On Time God,” “Testify” and “Do It!,” she stays busy on the road with electrifying performances at churches and concert halls all over the country. Known as the gospel “Pattie Labelle” during her live concerts, her reputation for warmth and compassion precedes her, as she routinely embraces fans with the love and sincerity of a close friend. Born one of 10 children, and growing up in Ohio, Dottie’s mission and principle focus remain intact; her ministry is people. Dottie has been featured in hit stage plays “God Don’t Like Ugly” and “A Fool For Love,” and in feature films, “Dirty Laundry” and “Kudzu Christmas.” She has been the National Spokesperson for The American Heart Association/The Ambassador for The Power To End Strokes, and a National Spokesperson for Speaking of Women’s Health.