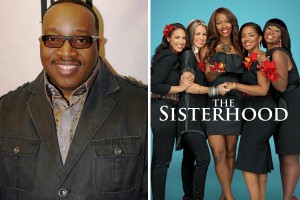 The ladies of the show “The Sisterhood,” new they would get a lot of opinions about their reality show that depicted the lives of preacher’s wives. They didn’t count on the celebrity reaction to be so swift.  Among the celebrities to speak out is Gospel star and Pastor Marvin Sapp.

The “Never Would Have Made It” singer released a short video Wednesday, Jan. 2 detailing his thoughts about the show. Admitting that he “prayed” about speaking out first, Sapp had both negative and positive things to say about “The Sisterhood,” a series that features wives and pastors residing in Atlanta.

“Let’s pray for those who are on the show, as the show begins to move forward, that there is some discernment and discretion that comes forth. Why? Because there are certain things that the world does not need to see, know and understand about the church,” Sapp said after comparing the women to a pig with a ring in its nose, citing Proverbs 11:22.

“What God was saying is the ring of gold in a pig’s nose wouldn’t be seen as pretty because of the filth that most pigs live in. It (the ring) would be non recognizable very, very quickly and it would become soiled beyond recognition and this is the way God feels about a woman that is not discrete and does not take the time to learn to act responsibility,” said Sapp. “Am I saying these women do not act responsibly? No. What I am saying is that until we get delivered from some things, we need to learn how to be discrete.”

Marvin Sapp is not alone in his thinking. Leaders, including Atlanta Elder Mark Moore, say the show is not an accurate representation.

“For the record, “Sisterhood” is not an accurate representation of real ministry families in Atlanta or anywhere. Reality TV is not reality,” Moore said in response to the premiere.

First Lady Sabrina Jackson also spoke out about the show, claiming it is not accurate either.

“This new show “Sisterhood” is not a good depiction of pastors and their wives. I’m a pastor’s wife and I don’t gossip with other ladies,” said Jackson.

There are many more who agree and have spoken out via social media, but is there anything good that can come from this show? According to Marvin Sapp, “The Sisterhood” highlights what may not necessarily be new but at the same time it is bad because the world is judging based on “ignorance.”

“The reason they judge us is because of their ignorance of the scripture. If they would just read scripture, they would understand that some of the issues that they see on television, as it pertains to the first ladies, are some of the same issues that were in the church in the beginning, during the times with Peter, Paul and Jesus,” Sapp said at the close of his video response Wednesday.

All of that said, “The Sisterhood” has ignited a lot of discussion. What do you think of the series?

“The Sisterhood” airs Tuesday nights at 9 p.m. on TLC.

Well said pastor Sapp. This show could’ve been a great way to showcase God and his people in a great light but from what I’ve seen so far it looks like the other housewives shows with the church as the backdrop.This show could be a prime example of “don’t let your good be evil spoken of” . I wonder how God is going to get the glory from this? how someone might be more intrigued/drawn to the church as a result of this? Or will this just lead to more of “see I told you so church women aren’t any different”. I guess having a show showcasing saved sanctified women doesn’t work well enough to gain high ratings on network TV.