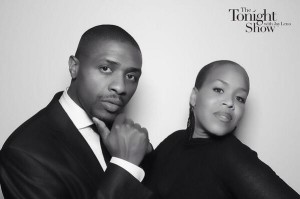 After 22 years, Jay Leno passed the torch of his late night gig to Jimmy Fallon. Jimmy will officially take on the role of the show’s host on Monday, February 27th 2014. Jay emotionally told his audience, ‘This has been the greatest 22 years of my life.’

However, Jay was not the only one saying good-bye. The lead drummer who happens to be the husband of Tina Campbell, one of the members of the gospel group Mary Mary will also be leaving the show. Teddy Campbell was the percussionist in the band for 4 years. The drummer tweeted how blessed and honored he was to be part of the Jay Leno Show.

Teddy is the one who was recently reported to have had adulterous affairs; not with only one woman, but several, according to his wife Tina. He has been musically inclined since he was a youngster – and has been playing for bands as a pro since he was 14 years old.

Teddy recalls that during his younger days, he had an intense passion for music. He would leave school and forget all about his homework – but would rush home, and excitedly play his drums until his mother demanded he complete his homework. Some of his musical idols are Dave Weckl, Vinnie Colaiuta; and Will Kennedy, who played with the Yellowjackets.

Teddy recalls after his high school graduation, the sky was the limit for his musical career. As a percussionist, he shared the stage with musical greats like Gerald Levert, Keith Sweat, Johnny Gill, Christina Aguilera and Ricky Minor. Minor was a huge part in making Teddy the success he is today – affording him opportunities to create bands for Kelly Price, Mary Mary, Britney Spears and a host of other musicians.

Teddy admits that he had the time of his life performing on the Jay Leno Show.

His drum solos last night were off the hook!!!

hope he will be playing the drums for god?

Stop cheating on your wife, honor your family. And make your wife see the truth about Trump!