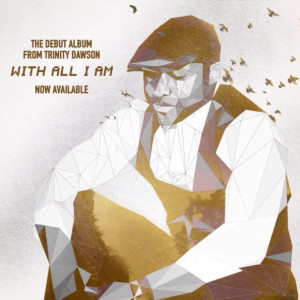 This week, new Urban Inspirational Christian/Gospel artist Trinity Dawson celebrates a hit debut across multiple Billboard charts, with his freshman album WITH ALL I AM (Dawson House Productions/New Day Distributors).

Released on October 30th, WITH ALL I AM is filled with moving original songs that are sure to become favorites for listeners. Dawson has created a deeply personal album that can be seen in such songs as “Just Be With Me,” and “You’re All I Need,” which acknowledge his utter dependence on God in pursuing his purpose. In more up-tempo songs like “I Win” and “I’ll Wait” listeners will enjoy the urban and pop influences of Dawson’s work while being inspired by the message. Dawson also collaborated with Grammy winner Aaron Sledge (Michelle Williams, Erica Campbell) on his Billboard Top 40 Gospel radio single “Not That Easy”. NFL’s Cleveland Browns wide receiver Andrew Hawkins collaborated with Dawson on a remix version.

Trinity Dawson’s road to becoming a recording artist has not been a direct path. After achieving national notoriety as a college running back for the University of Toledo, Dawson transitioned to the business sector, becoming the youngest Director of a publically-traded, Fortune 500 company. Now as a new Urban Inspirational artist he hopes his music will encourage people as they continue their pursuit toward purpose. Ultimately, his prayer is that people will be able to say, like he does in his title track, “With all that I am, with all that I have, with all that I do, may it please You.”