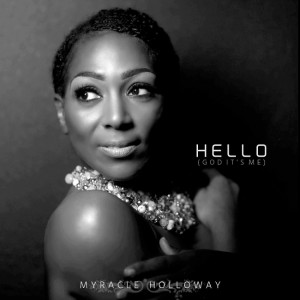 New music artist Myracle Holloway recently recorded and released her new inspirational single Hello (God it’s me), a spiritual version of Adele’s Hit Hello. The song is produced by Holloway’s husband Fred Smith and Michael Todd. Holloway originally uploaded a video of her singing the song with lyrics she wrote on December 15, 2015. Her video quickly went viral and garnered positive praise for its uplifting message.

The song, which deals with questions about each person’s purpose and place in the world, went viral on Xlive Africa and other sites garnering 20 million views and more than 600k shares. Several of the commenters on Facebook noted how moving, inspirational and meaningful the song was to them and their lives. Some even noted that hearing the song helped ease their depression and sense of despair.

The song’s lyrics are a reflection of Holloway’s own life journey. Holloway knew very early in her life she had the gift for singing. At seven years old she joined the church choir and at age 15 won her first talent show. During her high school years, her voice rapidly developed and success came early. After winning a talent show sponsored by Kashif, an artist and music producer, Holloway accepted a scholarship to Musicians Institute. She later toured with Earth Wind and Fire as a backup vocalist under the tutelage of Philip Bailey who helped her begin to find her voice as an artist.

Even as early success looked promising, Holloway struggled with the emotional trauma from the sexual abuse she experienced as a child and abandonment and insecurity issues brought about additional problems with substance abuse and ultimately depression. A break was needed in order to deal with this inner conflict and her outlook on life. With the help of counseling and rededication to her spiritual roots, Myracle ultimately began her recovery journey to peace and purpose. Winter 2010 marked a real turning point in Holloway’s life when she started as a residential advisor at Job Corps. She saw herself in many of the young women she encountered and knew she had found her purpose. Holloway was able to share her own experiences with the young women so they would not have to go through what she endured. And often during conflicts, Holloway would sing to them and peace would fill the room settling everyone down.

“I was blessed to share my love and gift with those young ladies, and I felt God put me there so we could learn from each other,” says Holloway. “This really began a serious journey of finding my purpose and using my gift of song to uplift others. Hello (God it’s me) is the next chapter of my journey, and I’m so happy that I am able to share this with so many who have found it inspirational.”

Hello (God it’s me) is available for download on Apple iTunes Music.