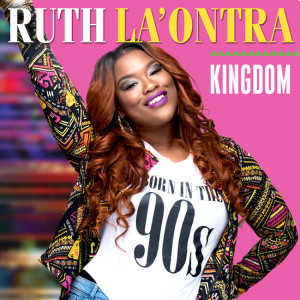 The dynamic 24-year old vocalist and rising gospel star, Ruth La’Ontra, is invading radio airwaves with her triumphant new Top 40 radio single, “Kingdom.” The song of “light” was the most added song to gospel radio playlists last week with an astounding eleven instant adds from stations as far north as Buffalo, New York and as far south as Jackson, Mississippi.

“I have been anticipating Ruth’s next offering for a while,” says Mike Chandler, President of the REJOICE! Musical Soul Food Radio Network. “She did not play around on her new single, `Kingdom.’ This is a hit. The production is great… The instrumentation is tight and the vocals are incredible! I immediately added it to WFMI, WGH, WZAZ and the REJOICE! Musical Soul Food Radio Network.”

“Kingdom” anchors La’Ontra’s highly-anticipated, untitled sophomore album that releases later this year. The set was crafted by Grammy® Award nominated producers, Anthony Brown (of Anthony Brown & group therAPy) and Justin Savage. Brown’s act is one of the best-selling groups in gospel music with Top Ten hits such as “Bless the Lord” and “Testimony” to its credit. Their song “Worth” spent 24 weeks at No. 1 on Billboard Magazine’s Gospel Airplay chart in 2015. “Ruth La’Ontra is such an incredible talent. From the first time I heard her sing, I knew I wanted to work with her,” says Brown who has also written No. 1 hits such as “It Ain’t Over” by Maurette Brown Clark. “`Kingdom’ is just the beginning. There’s so much more ahead for this young lady.”

The uplifting, sing-a-long song boasts an easy flow that will be sung by praise teams and congregations everywhere. “Ruth La’Ontra is amazing,” says Jerry Smith, Inspirational Programming Content Director and Program Director for WNNL103.9 FM The Light in Raleigh, North Carolina. “We love her new single. The song is upbeat, inspiring and uplifting, a perfect song to kick off the summer. Ruth is certainly a member of the new generation of gospel superstars.”

La’Ontra is gearing up for a busy summer to promote “Kingdom” and the forthcoming album. She performs on BET’s “Joyful Noise” TV program on July 9th at 9 AM ET. She’s also scheduled to perform at the North Carolina Gospel Announcers Guild event at the Millennium Hotel in Durham, NC on June 14th and at Christ Family Church in Cary, NC on June 16th. La’Ontra is also set to sing at Urban One’s annual Praise in the Park concert festival in Philadelphia, PA on August 26th.

La’Ontra has been singing since her childhood. After graduating from high school, she launched her professional singing career with her brilliant debut project, “So Good” (Tyscot Records), which won her a Stellar Gospel Music Award nomination as New Artist of the Year in 2014. The radio single, “Count It All Joy,” peaked at No. 25 on the Billboard Gospel Airplay chart and the spiritual love song,“I’m In Love With This Man,” was featured in the film, “Iniquity.”