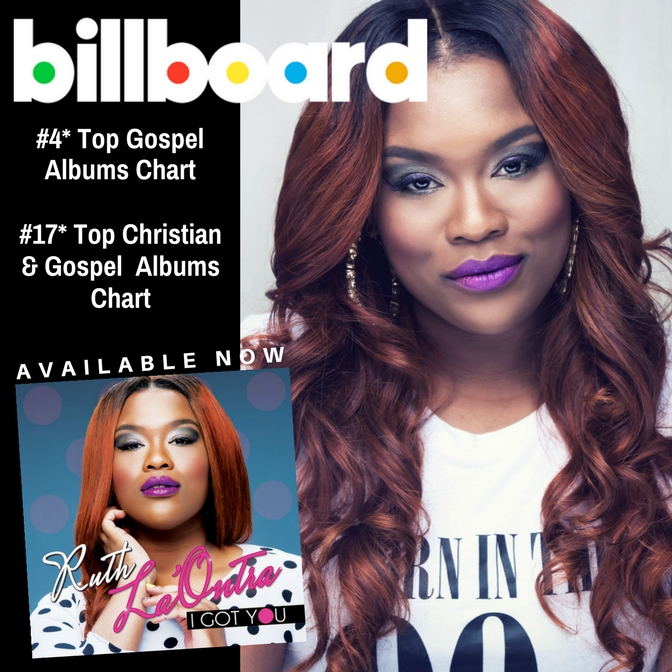 The dynamic 25-year old vocalist and rising gospel star, Ruth La’Ontra, is celebrating the release of her sophomore album, “I Got You” (ALJR/Tyscot Records), in a big way.  Click Here to preview and purchase.

The album was produced by the dynamic production duo of Anthony Brown (of the Grammy® Award nominated act, Anthony Brown & group therAPy) and Justin Savage. The singer just wrapped a music video shoot for the triumphant radio single, “Kingdom,” which is parked at No. 13 on this week’s Billboard Gospel Airplay chart and No. 16 on its Hot Gospel Songs chart – the highest chart positions of the southern gal’s career yet.

The set opens with the punchy, retro soul-styled declaration of faith, “I Got You.” Dramatic ballads such as “Safe,” “Come Through,” the hymn “Tis So Sweet” and the remake of The Thompson Community Singers’ 1992 classic, “In My Name,” show off La’Ontra’s unique vocal skills. The tracks, “Reign” and “Salt” are big worship songs and the set concludes with the electrifying big bang of the club-friendly, “On The Way.”

“Ruth La’Ontra is such a unique gift,” says Savage who has collaborated with gospel greats ranging from Donnie McClurkin to Israel & New Breed. “Her vocal ability is so versatile and vast. This project will take listeners on an exciting journey of great music, her voice leading the way; destination, God’s presence. Ruth has an incredible future in the Gospel industry. Get ready, Ruth La’Ontra is here!”

Purchase “I Got You” here.