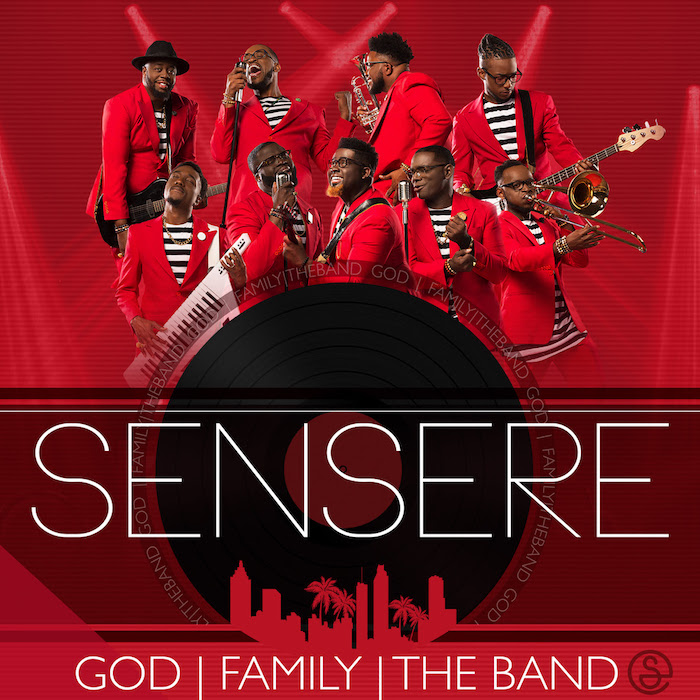 Billed as “one of music’s only authentic, premiere Soul groups,” Miami-based 10-member Urban Inspirational Band better known as SENSERE is back with new music with the release of their third independent full-length project God, Family, The Band (WrightSound Records/IndieBlu). Arriving on January 18, 2019, the LP’s official album cover and track-listing has been unwrapped.

Combining elements of Funk and Soul with their exquisite harmonies and full-bodied sound, God, Family, The Band is led by the group’s latest radio single, “Win,” (http://smarturl.it/SensereWin), written and produced by James Wright, and long-time member/lead singer, Brian Williams. The James Brown, funk-inspired groove, is the follow-up single to SENSERE’s highly regarded remake of Commissioned’s classic smash, “Tis So Sweet.”

Featured artists on the upcoming project include; Anesha Birchett, Lisa Knowles and Byron Holton. SENSERE is made up of founder James Wright, lead singers Brian Williams, Dwayne Charlton and Edgar Raulz; Tristan Dowridge on keyboard; Jaquan Hunter on bass, Will Marcelin on the guitar and saxophone, Darryl Efford on Trumpet and Charles McKay on trombone.

Pre-orders will be available in the coming weeks. God, Family, The Band serves as the first installment of a two-part release, which is slated for a 2 QTR release.

ABOUT SENSERE:
Billed as “one of Gospel music’s only authentic, premiere soul bands”, Miami, Florida’s Sensere draw inspiration from a wide array of artists, including the Temptations, Earth, Wind and Fire, Mint Condition, and the Mighty Clouds of Joy. Formed in 2003 by multi-instrumentalist, producer, composer, and arranger James Wright, the ten-member ensemble released their debut album, The Soul of Future Worship, in 2011, followed by a nationwide tour and appearances on The 700 Club, Bobby Jones Gospel, and at TBN’s 15th Street Show in New York City. In 2015, they released their sophomore full-length, Kingdom Therapy, which peaked at number 13 on Billboard’s Top Gospel Album charts on the strength of the singles “Love,” “Holla,” and “Faith Equals Happiness.”