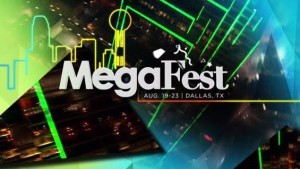 The show will take place in the Dallas Convention Center Arena on Thursday, August 20 at 8 p.m. Tickets range from $35 – $65 and are on sale now via Ticketmaster.

“Sheryl represents nearly every facet of MegaFest, not only as an entertainer and strong, empowered woman, but also as a savvy and multi-faceted entrepreneur,” Bishop T.D. Jakes said. “She has entertained audiences around the world, and we are excited for her to join us at MegaFest.”

In addition to Underwood, “A Time to Laugh” will feature Akintunde, who has written for comedians Chris Tucker and Mo’Nique and produced the documentary “No Joke” about life on the road with African-American comedians; Lavell Crawford, a stand-up comedian and actor best known for playing “Huell” in “Breaking Bad;” Tony T. Roberts, who has appeared on HBO’s “Def Comedy Jam” and “It’s Showtime at The Apollo;” Aida Rodriguez, a top ten finisher on NBC’s “Last Comic Standing” in 2014; and Marcus Wiley, a comedian, college professor at Texas Southern University and radio show host on the “Yolanda Adams Morning Show” heard in 52 markets around the United States.

Comedy shows are a MegaFest favorite. In 2013, the “Just Churchin'” comedy show featured Cedric the Entertainer and Niecy Nash. This year’s “A Time to Laugh” guarantees a hilarious yet respectful mix of comedic talent, with family-friendly stand-up routines from seasoned veteran comedians to the hottest up-and-coming talent.

Tickets for “A Time to Laugh” are available for purchase individually, separate from MegaFest registration packages. Additional MegaFest event and speaker updates will be announced throughout the summer, and the public is encouraged to check www.mega-fest.com for news on speakers, schedules and other exciting announcements.