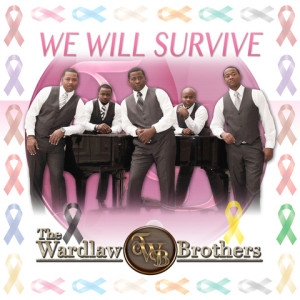 Cancer is a group of diseases that in one form or another has affected loved ones, friends or even oneself.  Cancer does not respect age, ethnicity or gender.  Millions all over the world have suffered, but, millions are surviving!  The popular gospel group The Wardlaw Brothers (TWB) are among those who have experienced this painful disease within their own family and are on a mission to spread hope and assist those who are suffering, as well as to celebrate those who have survived.

To honor all persons who have been touched in some way by cancer, The Wardlaw Brothers have written and released a special song “We Will Survive”.  The single is available only on iTunes with portions of the proceeds from the sale of the single to benefit two Georgia-based foundations.  TWB has partnered with The Nick Eason Foundation and The Pretty In Pank Foundation who are on the same mission, to offer support to those affected by this disease.

TWB is requesting that everyone partner with them in support of this effort by not only downloading the single, but by watching and sharing the companion video.  “We Will Survive” has a poignant and inspiring video that features friends, family and those TWB admire who are cancer survivors, currently fighting cancer and those who have succumb in their fight.

About: The Nick Eason Foundation
http://thenickeasonfoundation.com

Founded in January of 2012, The Nick Eason Foundation has a mission is to assist families with loved ones fighting cancer. The Foundation helps families financially as well as spiritually and emotionally to try and relieve some of the immense pressure that comes with managing such a critical family time.

The inspiration for The Nick Eason Foundation comes from Nick’s own experience losing his mother to breast cancer in 2012. He also lost his uncle to cancer, and has lost other friends to the illness over the past few years. Through his experiences, he realized that many families cannot manage the struggle alone, whether from the financial or emotional stresses the consistently arise.

Nick Eason is a native of Lyons, GA who played football for Clemson University and went on to play in the NFL for the Denver Broncos, the 2009 Super Bowl Champions the Pittsburgh Steelers, and the Arizona Cardinals. With the drive to achieve more goals after his eventual retirement, he is currently finishing his master’s degree in Human Development. His long-term goal is to build his foundation into a national organization, helping families across the country. Nick’s experience with his mom taught him the real power of family, and how that power can bring peace during such a difficult time.

About: The Pretty In Pank Foundation
http://www.prettyinpank.com/

The Pretty in Pank Foundation (PIP) was begun in Georgia in 2007 by three friends – Ann Owens, Jill Murphy, and Pete Frost whose families had each been greatly affected by breast cancer. Although Jill’s mother had lost her battle, Ann’s niece and Pete’s mother had recently been diagnosed.

And so it began, three friends enlisted local talent and other volunteers to plan a variety show FUNdraiser to “raise a little money” for the ladies affected in their small town. Ann, the owner of the local theater, afforded the use of the perfect venue. The first Pretty in Pank variety show was held, selling out, and making $3,000 and thus launching future events to support the foundation’s goal: to bring help, hope, and humor to those battling breast cancer.