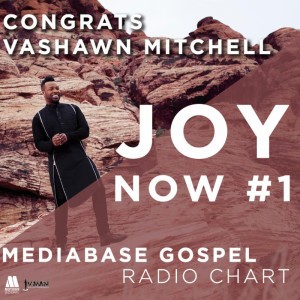 GRAMMY®-nominated hitmaker VaShawn Mitchell celebrates another number-one single this week as “Joy” climbs to the top spot on the Mediabase Gospel Chart. The song is the lead single from his new album, Secret Place: Live In South Africa, which earned Mitchell his first #1 debut on the Billboard Top Gospel Albums chart when it was released in November of 2016.

The truly “joyous” song from the multiple-award-winner was recorded during an extraordinary night of worship in South Africa. The feel-good song has touched a chord with audiences around the world.

“It is exciting to hear that ‘Joy’ continues to climb the charts,“ shares Mitchell. “With everything people are facing these days, I am blessed to be sharing not just another song, but a message of hope that reminds us, ‘the joy of the Lord is our strength!’ Let’s continue to spread joy, making it contagious ‘down deep in your soul‘!”

“We are thrilled by the genuine love gospel radio has shown to VaShawn and the song ’Joy,’ says Monica Coates, VP, A&R for Motown Gospel. “With Secret Place: Live in South Africa, VaShawn expertly merged the unique flavors of South African worship with the high-energy praise we’ve come to expect from him as a songwriter and worship leader. ’Joy’ is just the beginning.”

Mitchell, a perennial Stellar-Awards favorite, will also perform the song at the upcoming 32nd Annual Stellar Awards, set to tape in Las Vegas, NV on March 25.

Recorded on February 27, 2016, at the famed MOSAÏEK TEATRO in Fairland, Gauteng, South Africa (a suburb of Johannesburg), Secret Place: Live in South Africa is also available on DVD in the United States and in South Africa. The DVD offers exclusive behind-the-scenes footage of the live recording and “the Call” conference. The concert incorporated the beauty, power, and sounds of South Africa with a prominent sound of worship that has become Mitchell’s signature.