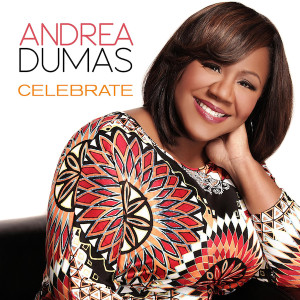 Standing just 10 feet away from legends like Yolanda Adams, Donnie McClurkin and Richard Smallwood has been the perfect training ground for veteran background vocalist Andrea Dumas. A member of Richard Smallwood’s ensemble, Vision, Dumas has been groomed by the best.

Last August saw the release of Dumas’ solo effort, Celebrate. Featuring the memorable lead single, “Jesus”, and other amazing cuts like “Call To Worship”, “You Just Hold On” and “Speak It”, the new project introduced the gifted vocalist as a new artist. In the few months following the release, the Autumn Day Entertainment Recording Artist has caught the attention of the industry and New Day Christian Distributors, known for distributing some of the top artists in the Christian and Gospel genres, recently signed Andrea to an exclusive distribution deal.

The new project features the talents of noted songwriters Darius Paulk, John Lakin and Shawn Bigby and the production skills of Steven McCoy and RaMon Shelton. Recorded live at her church, Greater Mt. Calvary Holy Church in Washington, DC, Celebrate provides what all Gospel music lovers need to enjoy good Gospel music: Christ-centered lyrics, soul-shaking music and pure anointing. Fans of the psalmist have been lifting hands to tracks like “Give Him Praise”, “We Live To Worship” and “Waiting For You”.

Comfortable in her role as a background vocalist, initially Andrea had no plans to record her own CD. Although she loves her background work, God’s continual prompting led her to step out on her own. The completion of the project is a testament of her faith and her obedience to the Lord.

“I want to inspire those who are apprehensive in moving into unfamiliar territory,” she shares. “During the recording process, I started to see the Lord open one door after another. I pray that others ignore the voice of fear and listen to that voice of faith,” she says.

Andrea has been on the road promoting the new CD. Last month, she traveled to Guadeloupe to perform at a Noel Gospel concert. Last week, she was featured on WATC-TV’s Atlanta Live performing tracks from the new release. In February, she will minister on the Trinity Broadcasting Network in Akron, Ohio and also in Philadelphia, Pennsylvania. On March 26th, she’s scheduled to appear on TCT’s live program Celebrate, a perfect complement to her CD of the same name.

During the last decade, Andrea has ministered on stages all over the world. As a background singer, she’s traveled to over 15 countries and participated in some of the Gospel industry’s most successful tours – Hopeville, Sisters in the Spirit, and the Yolanda Today Tour. She has also participated in the GRAMMY Salute to Gospel Music event and sung at the US Capitol and the White House. She was featured as a soloist on Isaiah Thomas & Elements Of Praises’ CD, The Greatest, Greater Mt. Calvary Church’s CD, Greater Mount Calvary Live and three of Richard Smallwood‘s CDs, Journey, Promises, and the upcoming release, Anthology.

For Andrea Dumas, it all comes down to sharing the message of Christ. She says, “As a background singer, I have seen the way music opens doors and gives access to diverse audiences all over the world. Music is able to transcend barriers and I want to use music to soften people’s hearts for the word of God.”