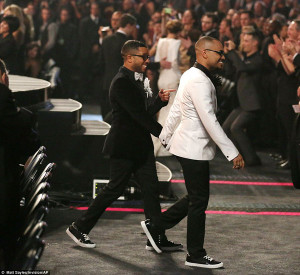 Madonna performed ‘Open Your Heart’ at the Grammys on Sunday night after Queen Latifah officiated the mass wedding of 33 gay and transgendered couples during Macklemore & Ryan Lewis’ performance of ‘Same Love,’ which has become a marriage equality anthem.  Lewis’ own sister Laura even was apart of the mass wedding.

A few Christian leaders were not shy in voicing their opinion, and even more Christians were outraged that the Grammy’s would take the focus off music to make such a statement.  Below are some of the comments that poured in on twitter, and some additional back-story.

Dressed in a sparkling evening dress, Queen Latifah glowed as she introduced the duo at the Staples Center in Los Angeles.

The stage was decorated with neon lights that echoed architecture and stained glass work commonly seen in churches.

The performers also embraced Queen Latifah onstage during the performance, who acted as officiant

Couples teared up during the mass wedding on Sunday night

The wedding’s rehearsal took place on Saturday, where the couples walked up and down aisles near the main GRAMMY stage. Show producer Ken Ehrlich stated that putting the soon-to-be-wed pairs onstage ‘could be viewed as more exploitative.’

“It seemed like less of a ‘show’ than if I put them onstage,’ Ehrlich explained. ‘I don’t want them to feel as though they’re on parade,’ he told the New York Times.

The idea for the weddings originated last fall when Mr. Ehrlich sat down with Macklemore & Ryan Lewis over lunch to brainstorm ideas for a possible performance. Knowing that their concerts have occasionally featured onstage marriage proposals, Mr. Ehrlich suggested taking it a step further with a full wedding.

The band was into it, so a casting agency was hired to find the couples, who at first were told only that the ceremony would take place on live television. The couples each signed confidentiality agreements — promising not to tell even their families.

Defending the multi-marriage stunt from critics against the Grammy wedding ceremony, National Academy of Recording Arts and Sciences president Neil Portnoy said, ‘I expect that people with all kinds of opinions might voice them, and that’s healthy, but we don’t need to stoop to the level of trying to find gimmicks and sensationalistic approaches to what we do.’

I want to say this This is no different then the a False Doctrines False Teachings Peosperity Sermons,Sow a seed of faith my seed is my faith idots enough us enough I had it. With the brainwashing you Got no power with Yahweh. First of all. Why cause you worship Yahweh on a day that sin keep by Sunday worshipping To A Sun-God. Who gave any man to even change the Law of Yahweh Man himself Roman Catholics forced then Research People Sunday is not Sabbath. then your preach a message pointing fingers at The so called Jews knowing they are not the real Hebrews. We are the disobedient one’s the Israelites why do you think we can’t trace our heritage I’m not black nor African-American which states I’m African but American. Your been leading the people of Yahweh from the truth. You can’t go in a hospital heal the sick that’s why the whole earth is gone to be amazed when Anti-Chrust come and do healing. Because the church that isn’t built upon Yahweh have deceive us and even when you confront them try to tell you. You can’t judge well The Bible tells me to judge your a False prophets Satanic tongues bewitching your congregation, can’t cast out demons instead invite them in with your chants. Your love ones will continue to die you will continue to suffer, your sons and daughters will not have a better life if you don’t turn away from worshipping idols celebrities, idol preachers who is leading to doom. Why would Yahweh Command This and from the end to beginning Sabbath is Saturday. So my Fellow Preachers and Prophets Evangelist list goes on your lack knowledge and have keep me under the spell I had to deliver myself in my own home purging out the satanic hold your had on me because I was sleeping. Even my daddy who is an Apostle turned his back in me as I preach to him what Yahweh true word is. I will not let my sisters and brothers be in darkness until it goes Pitch Black.

Normally I wouldnt chime in on these kinds of rages but Yah Vessal you sound ignorant!! You said a bunch of stuff that probably made you feel better about your sins.. But means nothing to life itself… First let me say that the world is filled with False prophets as a fullfillment of scriptures.. For if there were none.. There wouldnt be a reason to look out for them… But that doesnt mean that ever christian preacher is living the life you called out.. What this panel was about is respect… As Minister John Grey stated, Everyone is allowed to get married based on state laws. By dishonoring ppl of faith by adding clear church imagery is wrong and highly disrespecful..

Why does society have to continue to judge others, doesn’t church teach us to love our neighbor and show no judgement. And why do people have to continue to enter into the bedroom of others. Wasn’t slavery abolished ??? Another same type of discrimination happened then that is happening now. Stop hate and discrimination, and just allow people to live their lives as they wish and find their own happiness.
Many gays in the world today are saved, christian, grew up in and still attend church. What is the world coming to ?? Are we now going to be forced to sit segregated in restaurants, use different restrooms, or get arrested for holding hands in public ? Take a look at Arizona trying to pass a law which will give business owners right to refuse service to gays. Is this morally right ????. Stop Discrimination
100 percent , and if a christian couple wants to marry in a church, what should stop them and who should judge ???