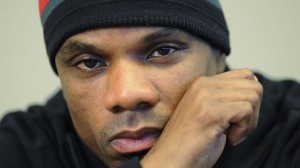 A message made its rounds on social media when Letrice Felton sent a tweet into the twitterverse about her 17-year-old son, Richie Artis,’ battle with cancer. According to the Daily Advance, Richie requested to meet Franklin through the Virginia-based Toby’s Dream Foundation that grants wishes to children with terminal illnesses.

However, it was a social media message written by family member Tyrek Slaughter that initially caught Franklin’s attention.

“My nephew, Richie, is battling cancer for the second time. He wants to meet Fetty Wap and Kirk Franklin. Take 10 seconds to share this, send it to them, and spread the word. It would mean the world to him.”

The Elizabeth City, North Carolina, teen has been hospitalized at the Children’s Hospital of the King’s Daughters over the last month was able to meet Franklin who was amazed at how he learned about Richie.

“Amazing how God can even use social media to make something beautiful happen,” Franklin captioned a photograph of he and Richie on Twitter.

Franklin’s stepfather, Raymond Felton, spoke about how grateful the family is for Franklin and his kindness.

“It was wonderful that Kirk Franklin took time out for somebody he didn’t even know. That is the part that got me,” Felton said of Franklin. “He was just as nice as he could be.”