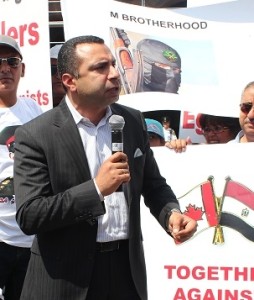 Jaswal asked why Christians in the western world remain silent about the persecution taking place around the world, noting that if this persecution was happening to Muslims and Jews, there would be chaos in the streets. El Shafie said: “Our world is divided into two zones. A conflict zone and a comfort zone. The more that you are a Christian in the conflict zone, the more that you are under heat, you are facing the front line, you are facing persecution, you are united. The more you are in the comfort zone, that’s United States, Europe, Canada, Australia, New Zealand and so on and so forth, they are selfish, un-united, divided, lazy. Don’t want to hear about the message of persecution. They prefer the message of prosperity and healing and salvation than the message of persecution. They don’t want to touch it. They are scared to read it. They are scared to hear about it. So about it they don’t know. They are ignorant. Not all of them, but a lot of them.”

“If you think that you are far away from persecution, think again,” warned El Shafie. “It’s just a matter of time to reach you. If you do not stand for others today, they will come against you tomorrow. Our world today is unfair place, unjust place. Not because the people are doing evil, because the people who remain silent about it.”

El Shafie has a unique voice, having once been arrested, tortured, and sentenced to die in Egypt for defending human rights and fighting for freedom of religion and the rights of minorities. El Shafie’s dramatic story, and those of others worldwide who are suffering persecution, are told in shocking detail in his new book, FREEDOM FIGHTER: One Man’s Fight for One Free World (Destiny Image).

This is the true story of his continuing fight for a world free of religious persecution. The book is a companion to the award-winning human rights documentary, FREEDOM FIGHTER, now available on DVD from Destiny Image Films. View the official trailer here: www.freedomfighterdvd.com.

For more information on Majed El Shafie and One Free World International, visitwww.onefreeworldinternational.org.