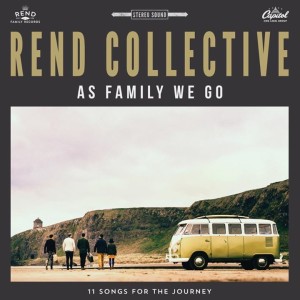 In addition to these significant achievements, Rend Collective is proving to be a strong force internationally, hitting the top 10 albums on iTunes in seven countries including the U.S., U.K. and Canada. The group also landed the No. 1 spot on every iTunes Christian Albums Chart including the U.S., U.K., Canada, Australia, New Zealand and South Africa. Rend Collective continues to gain a growing international fan base through touring, including recent visits to Brazil, Hungary, Switzerland, Hong Kong and Canada.

As Family We Go continues to receive overwhelming support from critics and media outlets including FOX News, Billboard, Relevant Magazine and more. To see what the buzz is all about, purchase the album here.

Last month, Rend Collective led worship alongside Chris Tomlin and others at sold out Worship Night In America events at NYC’s Madison Square Garden, Denver’s Red Rocks Amphitheater and Sacramento’s Sleep Train Arena. The group will re-join Tomlin on the second leg of his “Love Ran Red Tour” this October, and they are also gearing up for two headlining tours in 2016.

About Rend Collective: Hailing from a small town off the coast of Northern Ireland, Rend Collective (Gareth Gilkeson, Chris Llewellyn, Ali Gilkeson, Patrick Thompson and Stephen Mitchell) wants to be known as a celebration band, worshiping for God’s Glory and fame. Since the release of their first album, Organic Family Hymnal, the group’s authentic and energetic style of worship has attracted an international audience, with career sales of more than 300,000 albums. The group saw early success as their first ever single “Build Your Kingdom Here,” peaked at No. 12 on the National Christian Audience Chart. Their 2014 release The Art of Celebration, charted at No. 1 on the Billboard Christian Albums Chart within the first week of its release. Known for their electric lively worship, the band has been a part of several major tours with top artists such as Chris Tomlin, MercyMe, Kari Jobe, Lecrae and more. Rend Collective is currently preparing to embark on two headlining tours in 2016. The group’s anticipated new album, As Family We Go, is available now.