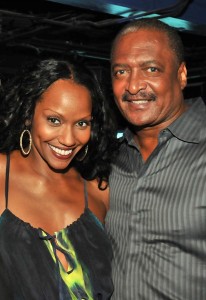 Back in April it was reported that Beyoncé’s dad Mathew would be the next member of the Knowles’ family to wed. Now we’ve learned those nuptials took place last Sunday while the entertainment world was busy with the BET Awards.

According to the NY Daily News a representative for Mathew said on Friday that he wed real estate agent and former model Gena Charmaine Avery, 48, in Houston. The couple had been engaged for a year and a half.

The 61-year-old Knowles guided his daughter to superstardom with the group Destiny’s Child and later in her solo career. She released him as her manager in 2011.

Beyonce and her rapper husband, Jay-Z, have one daughter, Blue Ivy. Of late, the curvy singer has been brushing off rampant rumors that she’s pregnant.

According to TMZ reports Bey and Solange skipped the ceremony:

Knowles tells TMZ his famous kids couldn’t make it to the ceremony, saying, “Unfortunately, Beyonce and Solange had previous engagements which made it impossible for them to attend.”

Knowles tied the knot to Gena Avery in Houston, TX following a year and a half engagement.

Congratulations to the happy couple.