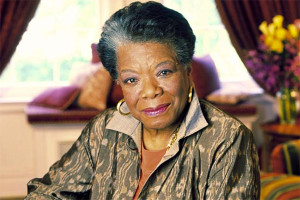 Maya Angelou died at her home in Winston-Salem, North Carolina on Wednesday. Known for her unique style, poetic poise, and firm tone, she will truly be missed.

The 86-year-old was a novelist, actress, professor, singer, dancer and activist. In 2010, President Barack Obama awarded her the Medal of Freedom, the country’s highest civilian honor.

One of Angelou’s most revered books was “I Know Why the Caged Bird Sings.”

Writer Julian Mayfield is said to have described the autobiography as “a work of art which eludes description.”

Angelou later returned to high school to finish her diploma and gave birth a few weeks after graduation. While the 17-year-old single mother waited tables to support her son, she acquired a passion for music and dance, and toured Europe in the mid-1950s in the opera production “Porgy and Bess.” In 1957, she recorded her first album, “Miss Calypso.”

In 1958, Angelou become a part of the Harlem Writers Guild in New York and played a queen in “The Blacks,” an off-Broadway production by French dramatist Jean Genet. 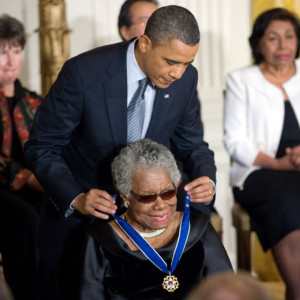 Affectionately referred to as Dr. Angelou, the professor never went to college. She has more than 30 honorary degrees and taught American studies for years at Wake Forest University in Winston-Salem.

“I created myself,” she has said. “I have taught myself so much.”

Angelou spoke at least six languages and worked at as a newspaper editor in Egypt and Ghana. It was during that time that she wrote “I Know Why the Caged Bird Sings,” published in 1969, the first in a series of autobiographical books.

“I want to write so well that a person is 30 or 40 pages in a book of mine … before she realizes she’s reading,” Angelou said.

Angelou was born April 4, 1928, in St. Louis. She grew up between St. Louis and the then-racially segregated town of Stamps, Arkansas.

The famous poet got into writing after a childhood tragedy that stunned her into silence for years. When she was 7, her mother’s boyfriend raped her. He was later beaten to death by a mob after she testified against him.

“My 7-and-a-half-year-old logic deduced that my voice had killed him, so I stopped speaking for almost six years,” she said.

From the silence, a louder voice was born.

Her list of friends is as impressive as her illustrious career. Talk show queen Oprah Winfrey referred to her as “sister friend.” She counted Martin Luther King Jr., with whom she worked during the civil rights movement, among her friends. King was assassinated on her birthday.

In an interview with CNN in January 2009, just days before President Obama was inaugurated for his first term, she gave her thoughts about the United States’ election of its first black president.

“It was as if someone in the outer sphere said, ‘What can we do to really show how important Martin Luther King was?’ ”

Seeing Obama about to take office made her feel proud, she said. “I’m excited. I’m hopeful. I’m talking all the time to people, and sometimes I’ve really said it so many times I wonder if I’m coming off like a piece of tape recording, but I’m very proud to be an American.

“In 30 or 40 years, (the election) will not be considered so incredibly important. … There will be other people in those next three or four decades who will run for the presidency — some women, some native American, some Spanish-speaking, some Asian. We’re about to grow up in this country.”

Then Angelou spoke in the way that she came to be famous for, each sentence a crescendo of emotion, a call to everyone to act and to be better.

“Our country needs us all right now to stand up and be counted. We need to try to be great citizens. We are necessary in this country, and we need to give something — that is to say, go to a local hospital, go to the children’s ward and offer to the nurse in charge an hour twice a month that you can give them reading children’s stories or poetry,” she said. “And go to an old folks’ home and read the newspaper to somebody. Go to your church or your synagogue or your mosque, and say, ‘I’d like to be of service. I have one hour twice a month.’

“You’ll be surprised at how much better you will feel,” she said. “And good done anywhere is good done everywhere.”

Angelou was also one of the first black female film directors. Her work on Broadway has been nominated for Tony Awards.

Before making it big, the 6-foot-tall wordsmith also worked as a cook and sang with a traveling road show.

“Look where we’ve all come from … coming out of darkness, moving toward the light,” she once said. “It is a long journey, but a sweet one, bittersweet.”