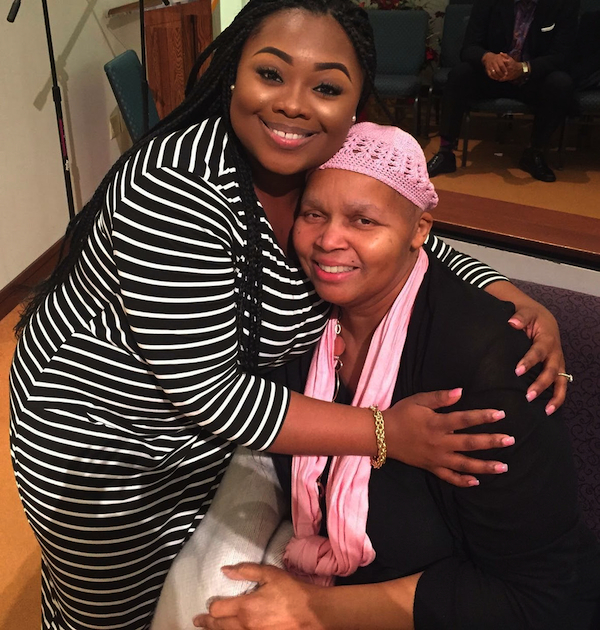 UPDATE: 12/27/16 Sheilah Belle tells us that her body is responding well to treatment.

“Praise the Lord everyone! I JUST got THE call back from my doctor with the results of the MRI, which showed my body responded well to the treatments and that I AM FINISHED WITH THE CHEMO TREATMENTS! Moving Forward! I Thank you all for your prayers! In tears!!! What a Christmas Gift! Merry Christmas! Hallelujah!”-Sheilah Belle

BACK-STORY: Recording artist Jekalyn Carr has launched a support movement for Richmond, Virginia based nationally syndicated radio personality Sheila Belle as she battles the winning fight against cancer. Carr was inspired to spearhead this support movement after attending Belle’s event last weekend in Richmond called “The Gift” – an event for cancer survivors. She was moved by hearing the winning stories from the survivors as well as Sheila Belle. Watch Jekalyn’s support movement video here: www.facebook.com/jasonmauricehardy/videos/10100700900092599/

Carr is calling a call to action to her fellow recording artists, radio announcers/PDs, executive, media partners and well-wishers in joining her to financially support Ms. Belle. All financial support will be used for all Belle’s medical expenses. Those wishing to support Ms. Belle, Carr can send money to Sheila Belle’s paypal account (thebelle@thegospeltimes.com) or mail to P.O. Box 14618, Richmond, VA 23221.

Sheilah Belle “The Belle” has worked in the field of broadcast news, journalism and with the press for over 25 years. In addition to producing The Belle Report, Monday through Friday, The Belle currently produces and anchors the syndicated radio news show, The Belle Report Entertainment News Update, now airing in 57 markets across the country. The Belle is also the Mid-Day host for one of the most powerful Gospel Stations in the country with 100,000 watts of power, Monday through Friday at Radio One’s Praise 104.7 FM in Richmond, VA.

Before being hired by Radio One, The Belle worked at Clear Channel Radio (I Heart Radio), where her talent kept her behind the mic as News and Community Affairs Director and Talk Show Hostess for five 50,000 watts FM radio stations in Virginia, including the top Urban Radio Stations in Richmond and Norfolk, for more than 12 years. Among her many honors, Ms. Belle was been inducted into the Broadcasters Hall of Fame in 2005, has been honored by the Gospel Music Workshop of America Gospel Announcers Guild, with the Print Media Award for 2007, the Crystal Mic Award, Rhythm of Gospel Awards for Print Media of the Year, several Community Service Awards and received two appointments by then Virginia Governor Douglas L. Wilder.

She has worked as a News Reporter for BET, WWL TV 4 in New Orleans, WRIC-TV, Richmond, VA, The Light and the Sheraton Broadcasting Network, Health Producer, for the ABC Richmond, VA TV affiliate, and Talk Show Hostess from New Orleans to New York for television and radio. She owns East Coast Gospel Music Summer Fest, The Belle Report Entertainment News Update, Ma & Popop Productions, Inc., The Gospel Times Newspaper, The Belle Report, www.thebellereport.com, LaBelle & Associates (a PR, Promotions and Marketing company), www.FeelGoodGospel.com and is the Producer of one of the largest outdoor Gospel Concerts on the East Coast Gospel Music Fest with The Belle, now entering its 7th year with crowds as large as 12,000.

Most recently The Belle, created Digital Social Media Connect with The Belle to help people navigate through Social Media with a growing response and a long list of host cities. Ms. Belle also works as a Media Consultant and Publicist. She is now recognized as one of the most respected Multi Media Journalist in the country has become a highly requested Inspirational speaker as she continues to grow her ministry to inspire and uplift others. As a result, she is NOW doing more speaking engagements in Churches, Music Workshops, Conferences, and Non-Profit Organizations with topics ranging from Ministry to Social Media.