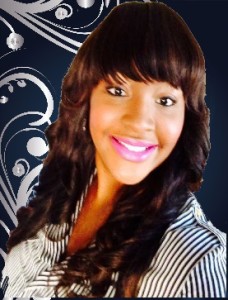 Some people’s lives are filled with twists and turns, a hodge-podge of experiences that seem to be random, un-orchestrated occurrences. But Pastor Wosheka Jefferson Burriel knows different. The Co-founder of Extreme Faith Ministries can attest to the fact that even through abuse, abandonment, infidelity and depression that God had a plan for her life. The singer, songwriter, preacher, pastor, author and entrepreneur overcame every single thing the enemy threw her way.

For the Tate Music Group Gospel recording artist and CEO of Anointed Melodies School of Music LLC, it started with a firm, spiritual foundation. “My great-grandparents raised me and I didn’t realize what a miracle that was in itself,” recounts Jefferson-Burriel. “I remember being 2 or 3 years old and sitting on the porch with my grandparents. We would sing hymns out of the hymn book; they would pour the scripture into me. I probably knew Psalms 23 before I knew my ABC’s. This is where the foundation of who God is started for me; they gave me Jesus. We didn’t have a lot because they were on fixed incomes but they gave me the most valuable thing on this earth and that was Jesus. The love of Christ was birthed through my great-grandparents.”

In spite of her great-grandparents careful watch over her, she was physically traumatized when a minister and family friend molested her at the age of four. That experience was the start of a brokenness in Pastor Wosheka’s soul, a brokenness that wouldn’t be healed until decades later. But the solid spiritual foundation of her family prepared her for the journey ahead. With a love for God and a love for her church, Pastor Wosheka’s talent for music moved her to the forefront. She was hired as a church musician at the age of eleven and at the age of fourteen, after singing at her church, a visiting revival pastor spoke to her and said, “You are anointed”. With additional gifts of teaching and preaching the word of God, she ultimately moved into both of those assignments. The prophetic calling followed and she began imparting what “thus saith the Lord” to people as well.

Although she was walking her God-ordained callings, there were still unresolved matters from her past. She married and many of her issues of abandonment (by her parents) and brokenness that plagued her previously became more apparent. Within the pages of her latest book, Healed On My Way, Pastor Wosheka recalls infidelity by her husband, and the feelings of rejection and severe depression. Pastor Wosheka gives her testimony of contemplating suicide, dealing with overwhelming grief and emotional abuse and her struggles with unforgiveness. A true overcomer, Pastor Wosheka Burriel takes the reader step by step on the journey God took her on to lead her to wholeness. 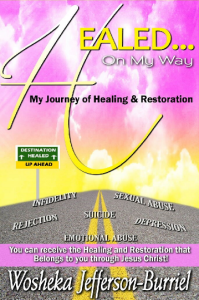 The title, “Healed On My Way”, comes from the book of Luke when Jesus healed the lepers. Jefferson-Burriel says, “I love the story of the woman with the issue of blood, but I’m not that woman. This book is about moving under the instructions of the Holy Spirit even when the issues are still on you. God didn’t lay hands on the lepers; he spoke to them from afar. The Lord gave me that title for my story because I was not the woman who got healed suddenly. God said you still have to walk around with your issue. God told me, ‘By the time I get you to your destination, your place called there, every scale will fall off you’. God was telling me, ‘As you move, you are going to be healed’. I had a choice to keep walking or get stuck in my pain, my shame and my guilt. If I would have stayed in that pain, it wouldn’t have blessed people and it wouldn’t have a purpose.”

The Shreveport, Louisiana resident, now called to restore the broken through the healing power of God, is Co-Pastor of Extreme Faith Ministries with her husband. An author of three books, she is also a speaker and entrepreneur. In addition to Anointed Melodies School of Music, LLC, she is the founder of Dream Makers Foundation, an organization with a goal of making dreams come true through music. She is also the visionary of Women of Purpose, designed to bring wholeness to God’s women and girls. In addition, she will be opening Groomed in G.R.A.C.E. (God’s Girls Revealed, Accelerated & Chosen for Excellence) Mentoring Academy for young ladies ages 4 to 20 in late 2014.

Musically, Pastor Wosheka released her debut album Surrender in 2010, and her sophomore album, PSALMBook, is set to release in late 2014. A BMI Songwriter/Professional Songwriter, Burriel’s first single from PSALMbook is “Praise Unusual”, a bouncy and inspirational cut and a Christian line dance song. In speaking about the song, Pastor Wosheka says, “There are certain times in life when God deserves an unusual praise. I know what to do on a Sunday morning, but this kind of praise is when I am by myself, in my cubicle. This is a praise in the break room at work or in the kitchen at home. It’s a praise that happens when you take a moment to think about where God has brought you from; this kind of praise is not your average praise”.