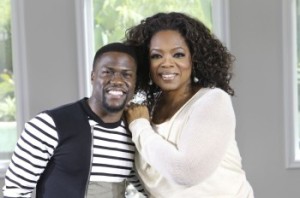 Actor Kevin Hart recently told TV host Oprah Winfrey about a lesson his mother taught him when he was still a struggling comic trying to make it in the entertainment industry — a story that involved a Bible, an eviction notice and six months worth of rent checks.

Hart, who appeared on “Oprah Prime” Sunday night, told the talk show host about how his mother, Nancy, financially supported his efforts to become an entertainer.

After hearing about her son’s aspirations, the comedian recalled his mom telling him that she wasn’t a “dream killer” and that he had one year to prove to her that comedy was truly what he wanted — and that it was something he could support himself doing.

So, Nancy agreed to help her son with his rent during the first 12 months of his career.

Hart told Oprah that the first six months of doing stand-up was fun. While he wasn’t making much money, he said he was forging important relationships and enjoying the process.

But then he missed a rent payment, so he went to his mother to get a check. When he asked her for the money, though, Nancy had an important question for her son.

She’s like, ‘Are you reading your Bible?,” Hart recalled. “I said, ‘Mom, come on — I don’t have time to talk about that right now. I’m late. I need the rent money.”

The conversation went back and forth for weeks, with his mother continuing to tell him that a discussion about rent would unfold once he read his Bible.

Then, the dreaded eviction notice came.

Hart — feeling desperate — went to his mom’s house to beg one more time, but to no avail. At that point the comedian decided he should probably open up his Bible, which led to a shocking surprise.

I go home and say, ‘Man let me open this Bible up,’” Hart explained. “Open the Bible up, six rent checks fell out. She put all my rent checks in the Bible.”