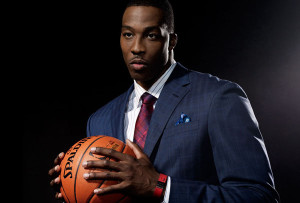 Dwight Howard, Houston Rocket forward-center, visited Pastor Kerry Shook‘s Woodlands Church over the weekend to share his testimony of coming to faith in Jesus Christ, and how an encounter with what he believes was the voice of God solidified his course to the NBA.

Howard, a seven-time All-Star who joined the Houston Rockets in July of this year after a brief stint with the L.A. Lakers and eight years with the Orlando Magic, spoke with Pastor Shook on the issue of divine guidance and honoring God in every area of one’s life.

“He’s honoring God with his talents in a major way,” Shook said while introducing the 28-year-old Atlanta native to those at the Houston-area megachurch and others watching via a live online stream.

In addition to sharing how God helped him through his decision to leave Orlando at the end of the 2012 season after being drafted by the team straight out of high school, Howard related how he made a decision for Christ at the age of 12. 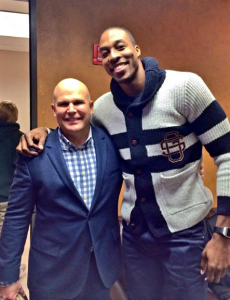 “And it all happened crazy,” Howard told Shook, adding that his teammates never believe him when he tells them the purpose behind his presence in the NBA.

“I was going to church one day, on a Friday night, and I was in the house alone and I said, ‘God what do you want me to do with my life? What’s my purpose, why am I on this earth?’” said Howard.

“All of a sudden, somebody calls my name out of the bathroom, ‘Dwight!’ And I’m like, ‘Hold up, I’m in the house by myself, nobody’s here, who’s calling my name?”

Howard said after hearing his name a second time, he decided to investigate.

“I went to the bathroom and God spoke,” said Howard. “He told me what He wanted me to do, what my purpose is.”

Howard said he was still skeptical, and asked God that if it was really Him talking, to tell him the message again that night at church.

Sure enough, said Howard, while at the altar for prayer hours later at church, the pastor prayed with him and told him “the exact same thing” he heard in the bathroom at home.

“The pastor said, ‘Your purpose is to preach God’s word in the NBA’ and bring light to Him and what He’s doing for me and for everybody else,” said Howard.

“After going to the NBA and being here for 10 years, it’s tough, it’s very tough. God has really brought me a long way,” he added.

Howard, who plays alongside Jeremy Lin, James Harden and Chandler Parsons as a Houston Rocket, visited Woodlands Church on Saturday, and reportedly plans to make another visit to the megachurch in January.

Woodlands Church was founded in 1993 by husband and wife Kerry and Chris Shook. The church, whose main campus is in The Woodlands, Texas, has since become a multi-site church and attracts on average over 18,000 worshippers every weekend.

Watch Howard’s testimony on YouTube, or in the video below from Woodlands Church: