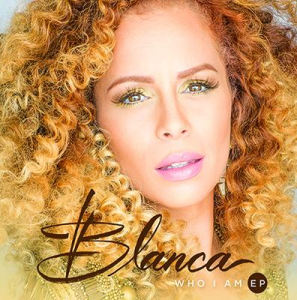 The debut solo EP from multiple-award winning, critically acclaimed powerhouse vocalist, Blanca, Who I Am, is available now to download or to stream. (See full track listing below.) The EP precedes her full-length album slated Spring 2015.

Just a few weeks into the new year, Blanca has already performed to six arena-sized crowds as part of Winter Jam 2015 (see full schedule below), which Pollstar named the number one most-attended tour in the world in quarter one for the past four years.

The tour and EP, her first as a solo artist, retain and elevate her emotive, powerful, yet effortless sound for which she became known as a member of Group1Crew, who claimed 5 Dove Awards during her tenure. Who I Am takes that sound to a new and distinct soul/pop, hip-hop vibe, indicating a different artistic direction, while opening the door to new collaborations, such as “Not Backing Down,” which features Tedashii (Reach Records).

“This new chapter in my life and career has been amazing,” Blanca says. “I feel that with every song written, and every show performed, God is stretching me, and showing me more and more of Who I Am, and what He has created me for. I also feel incredibly blessed to embark on this new journey with my family right by my side.”

About Blanca
When it comes to stepping out on faith, Blanca sprints. After wrapping her powerhouse vocal around infectious and intense beats as part of hip/hop group, Group 1 Crew for several years, she’s making the leap and is flying solo. “Who I Am,” the lead single from her forthcoming debut solo album, slated Spring 2015, is an upbeat reflection of a season of soul-searching and surrender, buoyed by an effervescent soul/pop vibe that brings a crowd to their feet, and hearts to the throne.