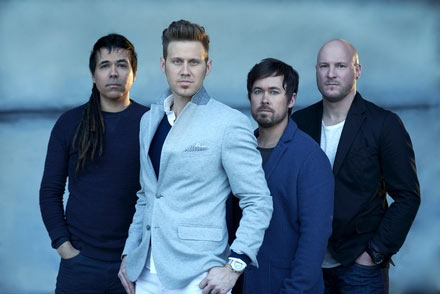 “We are so humbled to have been a small part of a song that continues to circle the globe inspiring people to faith in difficult times,” shares Jason Roy, Building 429’s lead vocalist, on behalf of the band. “It has been one of the greatest privileges of our career to sing ‘Where I Belong’ night after night, and watch in amazement as God made it an anthem for a generation.”

#IAMUNASHAMED: When Building 429 released their latest project last month, titled Unashamed, it was touted as their most powerful and anthemic to date. Accompanying the album’s theme of standing strong in one’s faith, the band kicked off their #IAMUNASHAMED campaign. Sharing from the stage each night to encourage others, Roy says, “In recent weeks we’ve once again felt a great wind of favor on our new record Unashamed. As fans around the world have taken on the #IAMUNASHAMED challenge and it has spread like wildfire, we’re once again reminded of the impact of Christian music on the world. We are so thankful to be a part of such an incredible community and gladly stand along side them to say #IAMUNASHAMED of the Gospel of Jesus Christ.”

People from across the U.S. continue to post daily about #IAMUNASHAMED. A few recent posts and images via Twitter are below:

To find out more about this movement and to receive free graphics and a change to win exclusive offers, please visit here. A devotional series is currently in the works.

DOVE AWARDS OPENER: While in between tour dates, Building 429 was chosen to kick off the 46th Annual GMA Dove Awards. Held on October 13, the band took the stage with a bang, performing their record-breaking hit single “Impossible” to a sold-out crowd in Nashville at Lipscomb University’s Allen Arena. The show has aired multiple times on TBN/Trinity Broadcast Network. A photo from their performance is below.

ON THE ROAD: Building 429 is currently headlining shows as well as appearing on the Women of Faith tour to support the release of Unashamed. The band will then join TobyMac next spring for the “Hits Deep Tour” as well as appear at numerous festival dates. Below is a list of current tour dates, with more being added daily.