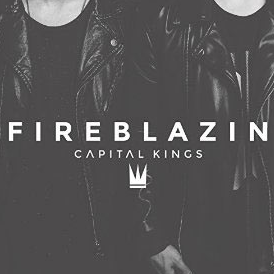 Today Gotee Records’ Capital Kings releases their new single, “Fireblazin,” available at all digital outlets. Along with the new single there a radio mix and two remixes, one of which is by Soul Glow Activatur. Click to get a copy of “Fireblazin” at iTunes or Amazon.

“We’ve had the privilege of traveling all over the country and certain parts of the world this past year and what we’ve seen is people’s lives being changed,” shares Capital Kings. “We’ve learned to become part of something bigger than ourselves. ‘Fireblazin’ is a movement to tell the world exactly that and to tell the world of the hope we believe in.”

Since releasing their debut self-titled album in 2013, Capital Kings has been going non-stop and 2014 hasn’t been any different. The duo started the year off with performances at the Passion Conference in Atlanta and Houston as well as TobyMac’s Hits Deep Tour, followed by the release of their first remix project titled REMIXD and were part of TobyMac’s Summer Shed Tour with Skillet & Lecrae. They will also be traveling internationally to Columbia and Peru followed by a slot on the highly anticipated Neon Steeple Tour with Crowder and special guests All Sons & Daughters. Tour dates listed below.

Capital Kings have become well-respected remixers with mixes for numerous artists including TobyMac, Britt Nicole, Colton Dixon but have have added to that by co-writing/co-producing the No. 1 single from Royal Tailor “Ready Set Go,” which they were also featured on. This summer, Capital Kings contributed their version of the popular GRITS’s song “Ooh Ahh” to the Gotee 20th Anniversary compilation Twenty Years Brand New.

Along with the release of the digital single, Capital Kings has premiered a music video for the single. Click below to watch.

About Capital Kings:
Capital Kings, a talented duo that blends pop, electronic dance music, and rap into an intoxicating musical mix that makes audiences want to move. Their self-titled debut LP debuted at No. 5 on the Billboard Christian Albums chart and peaked in the overall Top 40 iTunes Albums Chart during street week. The album featured the two Top 5 Christian Hot AC/CHR radio singles – “You’ll Never Be Alone” and “I Feel So Alive.” Since releasing their debut self-titled album in 2013, Capital Kings has been on the road as part of Winter Jam, TobyMac’s Hits Deep Tour and TobyMac’s Summer Shed Tour with Skillet & Lecrae.