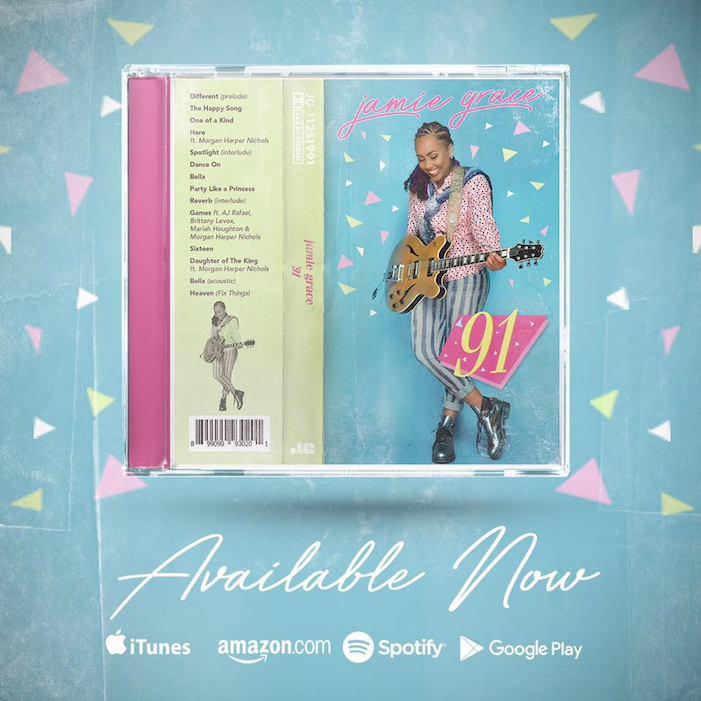 Christian music’s pop princess extraordinaire is back with some new grooves! GRAMMY® nominated and GMA Dove award winner Jamie Grace, who burst onto the music scene in 2011, is back after taking a few years away from the spotlight and she’s better than ever with the release of her third project, ’91, named for the year she was born.

Sherri Shepherd (ABC’s THE VIEW) called her ‘the real deal’ and her talent even caught the attention of mega-superstar Adele, during a concert stop last year. Grace had been contemplating whether to stop pursuing her music as a career – until that defining moment. “I guess you can thank Adele for ’91,” says Grace. “She had no idea, but that moment really made me give this another shot.”

’91 explores the singer’s life in great lyrical detail, from the intro track “Different,” which explains how it feels to not fit into the song “Games,” which speaks of the way people are your friends one moment and not the next. Of course, there’s catchy sing-a-long poppy goodness on the record, with “The Happy Song” and “Party Like A Princess,” and Grace delves into her position as a child of God in the song “Daughter of The King” and “Bella.”

Drawing inspiration from artists she listened to growing up – Amy Grant, ZOEgirl, Superchic[k], Avalon, Jaci Velasquez, Cece Winans, Janet Paschal, Babbie Mason and so many more – Jamie has always sought to write real-life lyrics that resonates with her listeners and their lives. You can check out the inspiration behind ’91 on Jamie’s popular YouTube channel – she holds a YouTube Silver Medallion Play Button for 100,00 + subscribers – and on her Spotify playlist.

“I really wanted to take the listener on a journey through my life,” says Grace. “This is absolutely my most personal record and the most personal lyrics I’ve ever written. My heart is literally on this record and I am ecstatic that it’s out today!”

Teasing the project release with lyric videos, countdowns and sharing stories behind the songs has caused major excitement – fans have been waiting for new Jamie Grace music and the wait is over.

’91 is available at JamieGrace.com, iTunes, Amazon and other digital outlets.

Listen to the “Happy Song” below.