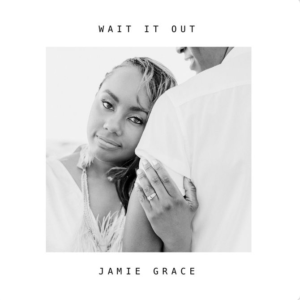 To say it has been a busy and exciting 2018 so for Jamie Grace is an understatement. The beloved pop princess extraordinaire released new music, celebrated International Women’s Day with YouTube, and then married Aaron Collins. It’s been a whirlwind of joy and happiness.

Jamie shared details and photos of her wedding day exclusively with People magazine. Click here to view the exclusive feature.

Today, Jamie released the song, “Wait It Out.” Jamie says, “I wrote this song about Aaron nearly 4 years ago…I hadn’t met him yet! And I had no idea when I would. I knew that I would someday fall in love and wanted to write a song that could hold my heart until then. I was sitting on the couch in my room playing the same three notes over and over and randomly starting to sing, “all the girls with no ring on their hand, gonna… wait it out cause we can, yes we can…” As I wrote the song, the lyrics started off as a fun melody to sing but gradually became a source of confidence. My sister had been married for a few years and I wanted to write about how I was happy for her, desired to be married someday, but wanted to celebrate my “singlehood” and never settle for less. For years I hoped to release this song but somehow it never worked out. I would play it for friends and even sometimes on tour but it never made it to an album. When I got engaged, I was nervous that releasing a song about being single wouldn’t make sense, but I knew that either way I wanted to have it for myself. A few weeks before the wedding, my (now husband) Aaron and I went to the studio to re-record my vocals. Contrary to the upbeat music and heavy bass line, I almost started crying the second I started singing. While I wrote this song about being single, nothing on this Earth has brought me greater joy than marrying Aaron. I’ve always sang “Wait it Out” with confidence that my “singlehood” was worth celebrating and my husband would be worth waiting for. Yet somehow, being married to the guy of my dreams and singing “Wait It Out” is the icing on the cake I didn’t know I needed.”

The song has quickly resonated with audiences and programmers alike, even being added to three Spotify playlists on the day of release: Going Together, Pop For Life and New Music Friday Christian.

ABOUT JAMIE GRACE:
JAMIE GRACE is a musician, speaker and actress from Atlanta, Georgia. Diagnosed with Tourette Syndrome at the age of 11 she lives life with a streak of resilience and dedication that is well beyond her years. She began acting and singing as a young child in school and church programs. A few years after her diagnosis of TS, OCD and ADHD she began pursuing music, acting and speaking as a career and a way to encourage other kids who may also have struggles in life. She has since founded ImAFighter.org and the Jamie Grace Foundation, both which advocate for children and families.

When Jamie Grace was 14, she created YouTube channels for her music which garnered the attention of record labels and producers. At the age of 17, Jamie Grace became a cast member on TBN’s iShine KNECT and began touring with iShine LIVE with her self-produced Pop/Hip Hop CD. Her Youtube channel continued to open doors which included being signed a major record label and joining the national tour The Revolve Tour as a keynote speaker. As she grew as an artist, songwriter and guitarist, she developed the “Jamie Grace sound” heard in “Hold Me” and “Beautiful Day” and continued to tour and record albums. At 19 she was nominated for a Grammy Award, Billboard Award and multiple Dove Awards where she went home as the Dove Award’s New Artist of the Year.

At just 25 years old, Jamie Grace has an impressive list of accolades – 4 #1 radio singles, a GMA Dove award for New Artist of the Year, a Grammy nomination and Billboard Music Award nomination – along with millions of views on her weekly Youtube videos and a “crazy but awesome” (as Jamie Grace explains it) tour schedule. She is also half of Harper Still, a country-influenced pop duo with her older sister and writing partner Morgan Harper Nichols.