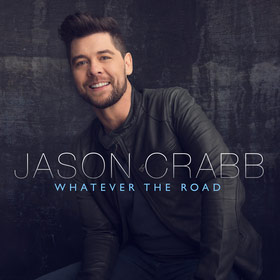 GRAMMY® winner and 21-time Dove Award winning artist Jason Crabb is set to release his new album, Whatever The Road, on September 18. This is Crabb’s fifth solo album of his career and his first with new label home Reunion Records, a division of Provident Label Group/Sony Music.

Produced by Jason Ingram and Paul Mabury, Whatever The Road showcases Crabb as the vocal powerhouse that long-time fans and peers have come to expect, paired with a fresh adult contemporary and pop sound.

Broadening his range more than ever before, the ten songs found on Whatever The Road take the listener through themes of God’s love never letting go, of celebrating freedom and redemption, and of resting in the promise that “He [God] is with you in the valley of despair, He won’t leave you there.”

Along with being a multi-faceted vocalist and musician, Jason Crabb is also an author, actor, and TV host. He has been touted by Nashville writer Robert K. Oermann as “one of the greatest male voices of any generation,” and according to Billboard, “Few artists can move among genres as easily as Jason Crabb.”

To promote his new album, Crabb is on tour throughout the summer and fall.